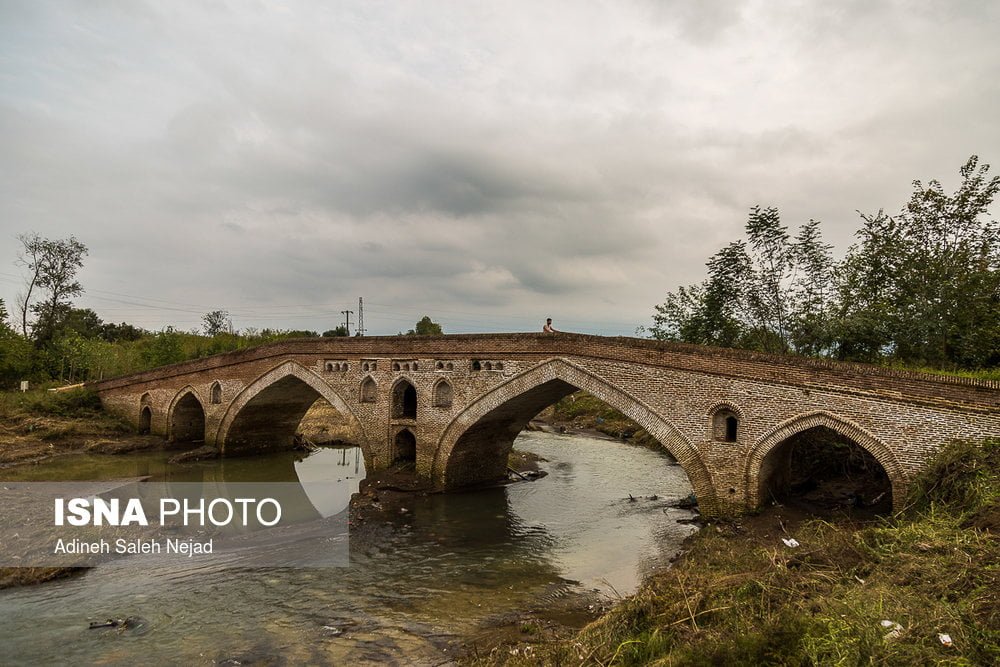 Some historical bridges in northern Iran have withstood recent flooding while some new ones have caved in, which shows how robust ancient bridges are.

Some bridges collapsed in the wake of the severe floods that swept through northern provinces of Iran in recent weeks. Still, there were some bridges that withstood the flooding due to different reasons such as the style of their architecture, the type of design and aerodynamics, their geographical location and the materials used in their construction.

One of the most important points is that many of the bridges that still stand following the floods are ancient ones. The bridges are not only regarded as historical and national heritage sites, they are still used by pedestrians, pack animals and different transportation means that need to cross rivers.

The “Temijan” mud-brick bridge was built during the rule of, and thanks to efforts by Behzad Beig in Gilan province during the Safavid era in 1611. It is 60 metres long and 5 metres wide. It is built on the Temijan River. The bridge’s trusses and body are made of bricks and its floor made of cobblestones. It has four large arch spans.

The “Cheshmeh Kolieh” bridge is in the town of Tonekabon in northern Mazandaran province. It was designed by German engineers in 1930 and built by Iranian architects. Its construction was completed in 1932. It is registered on the list of Iran’s national monuments.

The “Cheshmeh Kolieh” bridge has six trusses constructed on lime foundation. The bridge has eight arch spans as well. It has oval-shaped arches. There are decorative flower-like shapes on all sides of the bridge.

The underpass built next to the bridge by the local municipality was less than a decade old and was destroyed in the recent flooding.

The “Sartapeh” railway bridge of Savadkooh dates back to the first Pahlavi era. It is located in Sartappeh-Shirgah neighbourhood in Savadkooh area and has been registered on Iran’s list of national sites.

The “Mohammad Hassan Khan” bridge in Babol was officially used as a linking route between the two cities of Amol and Babol until two years ago. Finally it was decided that the bridge not be used by heavy vehicles any longer and be protected as a national monument. The bridge was built in the Qajar era to replace an older one.

The “Azan” bridge in Azan village in Jooybar has been built on the Siahrood River. The bridge dates back to the Qajar era. It has six arch spans, of which the middle one is the highest, measuring 6 metres from the surface of the water to its highest point. The bridge is mainly made of bricks and Sarooj mortar. It lies almost on the east-west direction. It is 80 metres long and 15.3 metres wide.

The “Jomeh-Bazaar” bridge of Jooybar also known as “Khesht Pol” dates back to the Qajar era. It is located five kilometres from Jooybar and built on the Siahrood River. The bridge is 7.5 metres wide. It has five Y-shaped spans, and its trusses are fitted with triangular breakwaters. At the moment, another bridge is under construction next to Khesht Pol.

The Langarood Bridge made of bricks and Sarooj mortar is regarded as the most famous historical monument of Langarood and a landmark of the city. This historical bridge is constructed on the Langarood River on the old path linking the city of Lahijan to Langarood. The bridge is located at the city centre near the “Samakan” bazaar.