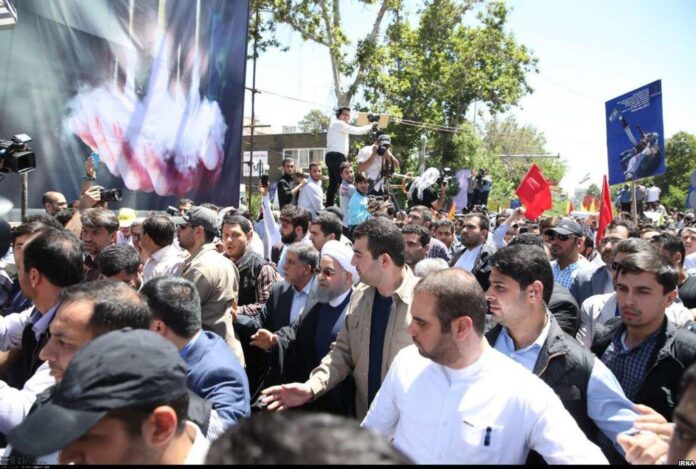 A leading Iranian conservative newspaper has decried the ‘suspicious’ move by a group of hardliners on the International Quds Day to chant insulting slogans against President Hassan Rouhani.

The Javan daily newspaper has, in a Farsi article, weighed in on certain individuals’ recent insults to the president. The highlights of the article follow:

If we do not consider this move suspicious, superficiality is undoubtedly a shortcoming which continues to take its toll on individuals loyal to the Islamic Revolution. It is only deep-rooted revolutionary people that can redeem the status quo. The individuals who have been repeatedly warned by the Leader not to act that way as “such actions will harm the country” have shown their non-compliance and, hence, are not regarded as revolutionaries.

A handful of individuals chanting slogans against Iranian President Hassan Rouhani during International Quds Day rallies touches the heart of any person loyal to the revolution. A few superficial people, in a costly and untimely move, depicted revolutionary forces as illogical and uncontrollable people.

The saga of chanting slogans against the president is condemned from two perspectives:

First of all, a handful of individuals are unfortunately trying to attribute the action to recent remarks by Leader of the Islamic Revolution Ayatollah Seyyed Ali Khamenei, and accordingly, some superficial people claim their actions are in accordance with the Leader’s comments. What the Leader said about the year 1980 was based on historical experience to boost the logic of warning. The Leader has, over the past 28 years, stressed the need to refrain from polarizing the society and to maintain national unity. Non-polarization of the society is so important to the Leader that he kept the former president [Ahmadinejad] from entering the presidential race. So, the Leader’s approach has been consistent.

Therefore, to interpret “preventive warning” as permission to do what they did and take to the streets would be the worst possible interpretation of the Leader’s illuminating comments and would amount to the hijacking of the “fire at will” strategy [Ayatollah Khamenei had urged revolutionaries to be ‘fire at will’ and act spontaneously on cultural affairs whenever they see the country’s authorities are not doing enough]. The Leader has, on numerous occasions, referred to positive and negative characters in history to further clarify his remarks, but one should not look at these examples superficially.

Second, the International Quds Day rallies symbolize the Iranian nation’s integrity against Zionists and their supporters. However, a handful of people claiming to be supporters of the revolution tried to hijack the Quds Day and its objectives, and present dozens of false analyses to justify their action. Real revolutionary individuals have, time and again, been harmed by these rogue elements, especially when it comes to the trend of democracy. The evolutionary people should express their disavowal the first chance they get.

Renowned Iranian martyr Morteza Avini would say that revolutionary individuals know the costs and benefits of their actions, and have a logic for whatever they do.