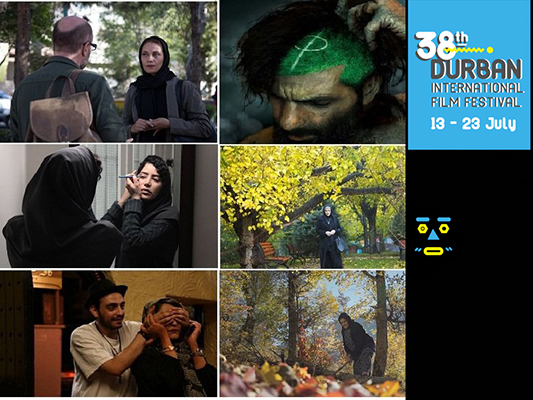 Three feature films, two documentaries and a short film will represent the Islamic Republic of Iran at the 38th Durban International Film Festival in South Africa.

According to a Farsi report by Saba News Agency, the features participating in the festival are “A Long Day” directed by Babak Bahram Beigi, “Abji” (Sis) directed by Marjan Ashrafizadeh, and “Nakouk” (Tuneless) directed by Amir Pourkian.

“A Long Day” is the story of a man called Shaheen, who returns to his hometown after many years and is faced with a dilemma. A dilemma, in which the borders of moral and immoral is not known. Shabnam Moqaddami and Reza Behboodi are among the cast.

The film has already been featured in festivals such as Pune, India; Sofia, Bulgaria; Zurich, Switzerland, etc.

“Abji” by Marjan Ashrafizadeh is another Iranian film that will be featured in the Durban Film Festival. Faces like Golab Adineh, Pantea Panahiha, Hamid Reza Azarang, Massoumeh Qassemipour, Shirin Yazdanbakhsh, and Babak Hamidian have played in this film.

“Nakouk” tells the story of a teenager, Arash, who has recently quitted drug abuse and lives with his mother. With his close friend, he works in a café. Arash’s father, who had fled Iran a long time ago, gets in touch with his son on social media and tells the son he is going to return to Iran. But new events are going to unfold.

“Advantage” directed by Mohammad Kart and “Papeli” by Mahdi Zamanpour-Kiasari are the two Iranian documentaries at the South African festival.

“Papeli” is the story of a rural life and is about a person who suffers from spinal cord injury after an accident. The man lives with his wife and daughter who experience ups and downs each.

The short film “Retouch” directed by Kaveh Mazaheri is also present at the festival. It is the story of a woman called Maryam, whose husband dies in front of her eyes, and she only looks.

An annual festival, the DIFF kicked off on July 13 in the coastal city of Durban in South Africa and will continue until July 23.