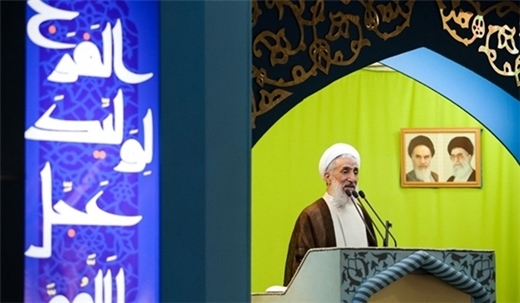 Ayatollah Kazem Sediqi has said that inspection by foreigners of Iran's military centers is against the teachings of the holy Koran.

“It is not acceptable to us to see our nuclear energy (industries) become a lion without mane and tail and useless, as we will then (under such conditions) be incapable of enriching uranium and will depend on the foreigners for meeting our domestic needs,” Ayatollah Sediqi said, addressing a large congregation of people on Tehran University campus on Friday.

He also voiced opposition to the inspection of Iran’s military and missile centers by the foreigners, and said it is against the teachings of the holy Koran.

Sediqi underlined that the guidelines of Islamic figures and clerics also say that the enemies shouldn’t have Muslims under their control.

In relevant remarks on Wednesday, Supreme Leader of the Islamic Revolution Ayatollah Seyyed Ali Khamenei urged the Iranian negotiators not to bow to the West’s pressures and keep on insisting on the country’s stances that have already been announced.

“The negotiators should insist on the stances that have been announced and I hope they could meet the country’s and the ruling system’s interests,” Ayatollah Khamenei said in a meeting with Iranian Parliament Speaker Ali Larijani and parliamentarians in Tehran.

Yet, the Supreme Leader underlined that the Iranian negotiators are engaged in hard work and efforts.

“There are many solutions to the nuclear issue all of which rely on the domestic capacities and reinforcing (domestic) production,” Ayatollah Khamenei added.

The Supreme Leader underlined that the nuclear issue is only a pretext to pressure Iran and even if this problem is resolved, the Western powers would seek other excuses such as “human rights”.

Ayatollah Khamenei called on Iranian officials to rely on the country’s domestic capabilities, and said, “If we boost production and use domestic potentialities, this will not only solve internal problems, but also facilitate settlement of foreign issues such as the nuclear one,” Ayatollah Khamenei added.