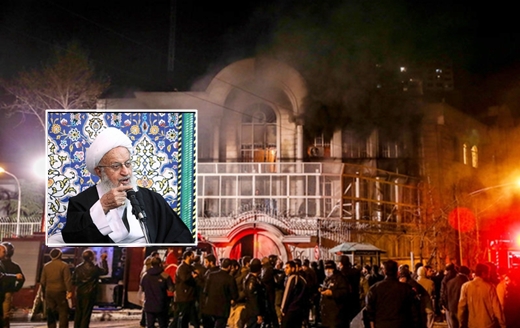 Ayatollah Makarem Shirazi, a Shiite source of emulation, has rejected as inappropriate the storming of the Saudi diplomatic missions in Iran following the execution of Sheikh Nimr al-Nimr.

Senior Shiite cleric Ayatollah Nasser Makarem Shirazi says the Saudis who have experienced failure in pursuit of their regional policies and unholy goals are bent on taking revenge.

“The Saudis should know that bombardment of Yemen won’t get them anywhere,” he said, adding the Saudis want to take revenge for the defeats they have suffered in Syria, Yemen and Iraq.

The Islamic Republic News Agency (IRNA) on Monday released Ayatollah Makarem Shirazi’s remarks following the execution of Shiite cleric Sheikh Nimr al-Nimr and the storming in Tehran and Mashhad of the Saudi Embassy and consulate. The following is the translation of part of his remarks:

The source of emulation said the martyrdom of this great sheikh will carry a heavy price tag for the Saudis.

He once again offered condolences over the martyrdom of Sheikh Nimr and condemned the Saudi crime and said that the storming of the Saudi Embassy in Tehran and its consulate in Mashhad by certain elements was an inappropriate measure.

The Ayatollah then advised people and all staunch followers of the Islamic establishment and revolution against taking measures which could prove costly for the country and the establishment.

He further said that such a measure [storming the embassy] is likely to have been taken by two groups: One, the supporters of the establishment who have been enraged by the Saudi policies and decision; although they sometimes get carried away, they need to remain vigilant.

“Another group is comprised of the infiltrators who seize such opportunities to fish in troubled waters. They seek to fuel animosity between the Shiites and Sunnis and help conflicts flare up so that they can reach their own objectives,” he added.

The grand ayatollah went on to say that both the establishment and Islam will have to pay a dear price for such measures. “When global condemnation is pouring in against the Saudis, why should we do something which can turn the tables? I hope our friends can stay calm, cool and collected and do not take measures which are likely to play into the hands of the enemies. I hope they can seriously block the path of infiltrators.”