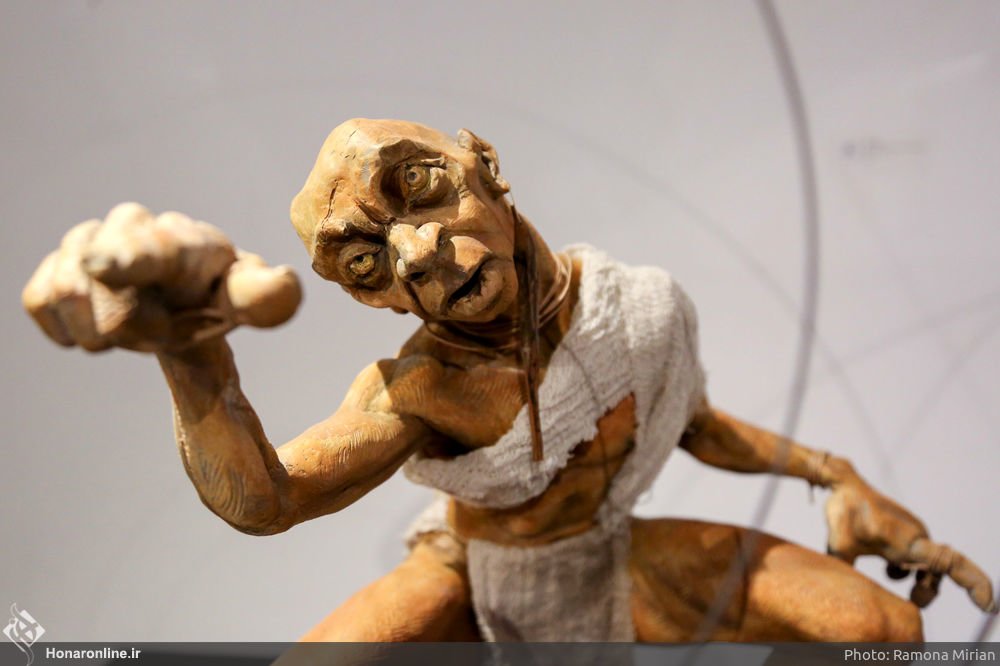 An Iranian artist recently held an exhibition with the main theme of changes that human being undergo to move from what they are to what they want to become.

Abouzar Vanaki’s exhibition titled “We Are … We’ll Become” displays human figures undergoing changes from what they are to what they want to become.

The exhibition, recently held in Shirin Gallery in Tehran, put on display 13 sculptures, each of which has a height of 70cm.

The figures are hanging in various positions depicting the process of going through different stages.

Vanaki says the figures resemble human body but they belong to creatures which have transformed themselves. The figures have unusually large hands and feet, strange face or other features distinguishing them from ordinary human beings.

Vanaki has made the figures out of resin. He has also coloured them with oil colours giving them the appearance of real creatures. The figures’ bodies are tanned and shrouded in soil. Meanwhile, they are covered in old clothes which seem to be the last ones left for them in the world.

According to the Iranian artist, a visitor who is going through a hard time in his/her life may say how miserable the figures on display in the exhibition are.

“But a visitor who is involved in a project and knows well that he/she should pay a heavy price to achieve his/her goals may view the figures as happy creatures,” Vanaki said.

He then said this is his first exhibition, adding “I began my career as a sculptor about 15 years ago and during these years, I’ve made a number of statues which were put on display in a number of public places in Tehran including Azadi Stadium, Jashnvareh Street, Sa’adabad Palace, among others.”

Vanaki went on to say that “for several reasons, I decided to showcase my statues in a gallery instead of public centres. To me, in galleries, the visitors have enough time and concentration to think about the message of each piece. In our daily lives, we are usually too engaged in our daily problems to concentrate on artistic pieces which we may come across on the streets,” he noted.

What follows are Honar Online’s photos of the exhibition of Vanaki’s statues, which was wrapped up in Shirin Gallery in central Tehran on October 24: