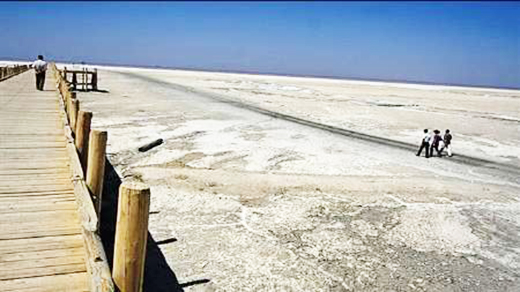 Transferring water from the Caspian Sea is not economically viable, an MP says.

A member of Iranian parliament has said that transfer of water from Iran’s northern neighbors, namely Georgia and Armenia, will help save the world’s largest salt lake, the Orumiyeh Lake, which is on verge of drying up.

“Agreements on the issue have already been signed and water from Georgia and Armenia’s Kera Fountains and Swan Lake will be channeled southward using three pumping stations along the way, all three of which will be on Iranian soil,” said Ali Alilu in a press conference.

He said that transferring water from the Caspian Sea is not economically viable firstly due to the high levels of water pollution and secondly because of high costs associated with such a project.

“The 36 billion cubic meter reservoir of the Orumiyeh Lake has shrunk to two billion cubic meters today and redirecting a portion of water flowing in Aras and a number of smaller rivers will do nothing to save the lake,” he reiterated.

Alilu said that the bulk of the water transfer project needs to be implemented in Iran and the project is predicted to be finalized within two years.

He said that the water will be both bought and bartered from those two countries and the purchased water will flow to Iran at 60 to 80 cubic meters per second.

The MP emphasized that President Hassan Rouhani’s government, especially his Department of Environment (DOE) headed by Masoumeh Ebtekar, has been very successful in its bid to save the Orumiyeh Lake.

“If the drying of Orumiyeh Lake had continued unchecked, as was the case during the previous government, five provinces would have soon faced serious environmental hazards, and a grave human catastrophe,” he said.