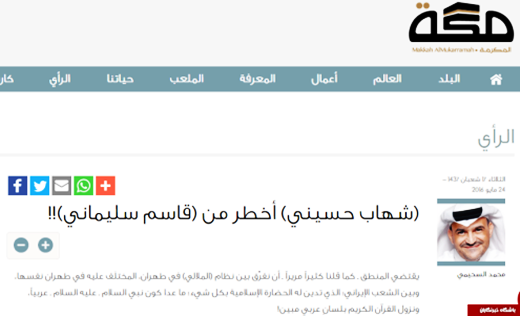 Here’s IFP’s translation of a report by Al Alam on the Saudi article:

Following the recent success of Asghar Farhadi’s latest movie, The Salesman, with Shahab Hosseini receiving the Best Actor award at Cannes Film Festival, the Saudi newspaper Makkah published an article, in which the author referred to Iran’s culture, particularly its cinema, as being more dangerous to Saudis than its politics, including General Soleimani.

The Saudi paper admitted that the “Islamic civilization is indebted to Iranian people for everything,” and expressed its regret over the cultural weakness of Saudi Arabia vis-à-vis Iran.

“Iran has invaded the entire world through its professional cinema industry,” the author, Mohammed al-Sahimi, said.

Sahimi highlighted some of the big budget movies made in Iran, commenting, “I previously talked about the film The Kingdom of Solomon, which was made at the standard of Hollywood movies, and noted how the film had worried the Zionist lobbies.”

“Of course, this was not the only impressive achievement of Iranian cinema at a global level; Iran has also managed to impress the world through other films like Prophet Joseph and Muhammad, the Messenger of God,” he went on to say.

He further pointed to the latest achievement of Iranian cinema, The Salesman, saying, “In the latest success, Shahab Hosseini, the Iranian superstar, won the Best Actor award at Cannes Film Festival 2016.”

The author concludes in a seemingly regretful tone, that, “Iran is gaining all these achievements while we [Saudi Arabia] are the only country in the world where there is no cinema!”