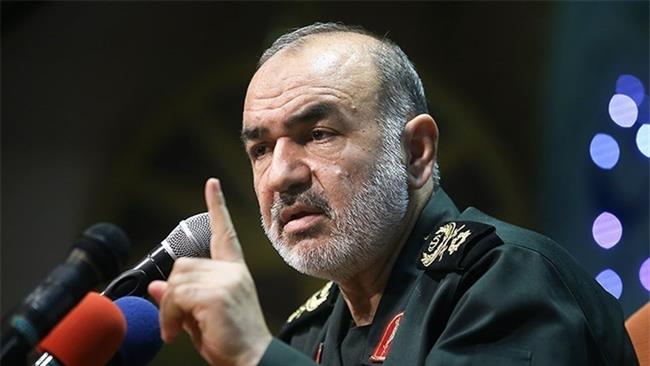 A senior Iranian commander says Saudi Arabia will collapse in the near future, unless it ends its sectarian policies in the region.

The policies of the Saudi regime will have a domino effect and they will be buried under the avalanche they have created, said Brigadier General Hossein Salami, the second-in-command of the Islamic Revolution Guards Corps (IRGC), on Thursday.

“If the Al Saud regime does not correct this path, it will collapse in the near future,” Tasnim news agency quoted General Salami as saying.

On Saturday, Saudi Arabia announced the execution of top Shia cleric Sheikh Nimr Baqir al-Nimr and 46 others despite international calls for their release. This led angry protesters to held demonstrations in front of the Saudi embassy in Tehran and its consulate in the northeastern city of Mashhad, censuring the Al Saud regime for the killing of Nimr.

Some people mounted the walls of the consulate in Mashhad while incendiary devices were hurled at the embassy in Tehran. Some 50 people were detained over the transgression.

Riyadh severed diplomatic relations with Tehran after the incident.

General Salami described the kingdom’s decision to sever ties with Tehran “irrational,” adding that the violence in Iraq and Syria were the direct results of Saudi’s sectarian policies in the region.

He also compared the policies of the Saudi regime with those of former Iraqi dictator Saddam Hussein who was executed in 2006 during the US-led invasion of Iraq.

The path the Saudi regime is taking is like the one Saddam took in the 1980s and 90s. He started a war with Iran, executed prominent clerics and top officials, suppressed dissidents and ended up having that miserable fate, Salami noted.

Rouhani has said, “Such a measure is in line with sectarian policies and aims to spread terrorism and extremism in the region and across the world, which have destabilized the region and waged war and conflicts in recent years.”

The execution also saw condemnations from Iraq and the UN. Muslims and human rights activists all over the world also protested Nimr’s killing.