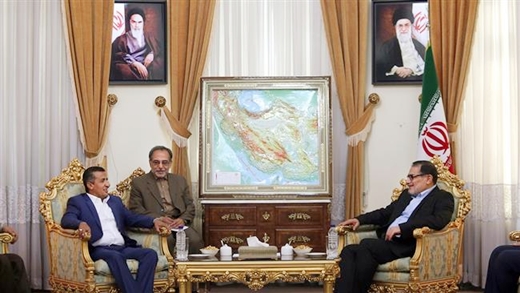 The secretary of Iran’s Supreme National Security Council called on the international community to seek a political solution to the Yemen crisis.

“Targeting residential areas, hospitals, service providing centers and the carnage of innocent women and children along with the inhumane blockade of the Yemeni people are flagrant examples of war crime,” Shamkhani said in a meeting with a delegation from Yemen’s Supreme Revolutionary Committee in Tehran on Tuesday.

He added that all international organizations must protest Saudi Arabia’s ongoing aggression against Yemen.

Shamkhani said the Saudi government’s use of weapons containing toxic gas in its missile attacks on residential areas in Yemen is aimed at “genocide and suppressing the legitimate resistance” of the Yemeni nation.

The SNSC secretary called on the international community to seek a political solution to the Yemen crisis.

“Dialog among Yemeni groups and prevention of any foreign intervention in the country are the only way to establish understanding and restore security and stability to Yemen,” Shamkhani said.

He expressed Iran’s full support for the resistance of the Yemeni people against foreign aggression.

For his part, the head of the Yemeni mission, Naef Khaef, hailed Iran’s support for the Yemenis and slammed international circles’ silence in the face of the Saudi government’s crimes in Yemen.

He said the Yemeni people would continue their resistance against foreign aggression and insisted on diplomacy as the only solution to the crisis in the impoverished country.

Yemen has been under military strikes on a daily basis since Saudi forces launched their military aggression against their southern neighbor on March 26, in a bid to undermine the Houthi Ansarullah movement and restore power to fugitive former President Abd Rabbuh Mansour Hadi, an ally of Riyadh.

About 6,400 people have reportedly lost their lives in the Saudi airstrikes, and a total of nearly 14,000 people have been injured since March. According to the United Nations Children’s Fund (UNICEF), 505 children are among the fatalities.