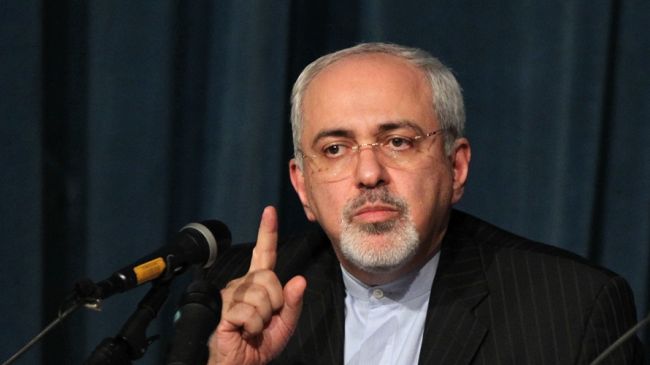 Iran's Mohammad Javad Zarif says that sanctions against Iran have not produced good results for the imposing countries.

Iran says the illegal sanctions slapped against the country over its nuclear energy program have failed to meet the goals of those countries that imposed them.

The anti-Iran bans are not part of a solution, Iran’s Foreign Minister Mohammad Javad Zarif said, speaking to Press TV on his way to the Omani capital, Muscat, for further talks on the Islamic Republic’s peaceful nuclear activities with P5+1.

The sanctions are illegal and have failed to bring about the results intended by those that imposed them, the Iranian foreign minister added.

“It is important for the West to understand that sanctions have never contributed to the resolution of this issue. Sanctions are not a part of solution. Sanctions are the most important part of the problem. They’re illegal in nature. They must be removed. They have not produced any positive result. The only things that sanctions have produced for the West are about 19,000 centrifuges.”

On Sunday and Monday, Zarif and US Secretary of State John Kerry will meet in Muscat together with the former European Union’s Foreign Policy Chief Catherine Ashton, who chairs the nuclear negotiations with the Islamic Republic.

The top Iranian diplomat said the removal of sanctions is a main theme of the talks, noting that the extent of Iran’s enrichment activities is another key topic at the talks.

Iran believes a final deal over its nuclear energy program can be reached if the other side has the political will to do so, Zarif added, noting that his Sunday meeting with Kerry and Ashton will center on bringing the viewpoints of both sides closer together.

Following the talks, Ashton will chair a meeting on Tuesday, also in Muscat, of political directors from P5+1 – France, Britain, the United States, Russia, China, and Germany.

Last November, Iran and P5+1 clinched an interim nuclear accord, which took effect on January 20 and expired six months later. However, they agreed to extend their talks until November 24 as they remained divided on a number of key issues.