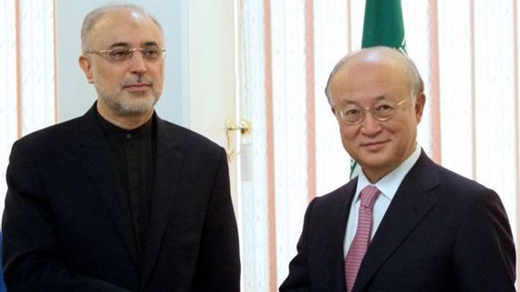 After a two-day visit to Prague, Salehi, the head of Iran’s AEOI, went to Vienna and there met the DG of IAEA, Amano, to discuss issues related to the JCPOA.

“Amano issued a good report about the implementation of the JCPOA, in line with our demands that the IAEA just consider the JCPOA and not other interpretations,” said Ali Akbar Salehi, the Head of the Atomic Energy Organization of Iran (AEOI), after meeting with Yukiya Amano, the director general of the International Atomic Energy Agency (IAEA) in Vienna.

Salehi told the media that the meeting was intended to be about the implementation of the JCPOA (the Joint Comprehensive Plan of Action signed between Iran and sextet on July 14, 2015, in Vienna) and the measures taken within that framework, in the first three months of the project. He said that he was content with Amano’s report but he had again articulated Iran’s concerns in the meeting.

“The JCPOA is a thick tome full of articles, and it is possible to make different inferences about the content of it. For that reason, we [the government of the Islamic Republic of Iran] insist that the text itself to be the [legal] touchstone, and not the inferences or interpretations,” the head of Iran’s atomic energy organization underlined.

He reaffirmed that Iran’s relationship with the IAEA is excellent, and the tasks are being seriously followed up by Mr. Amano and his colleagues.

“Matters were discussed very transparently and clearly, with fewer political concerns, and more technical and legal considerations, and the overall output of the meeting was positive,” stated the Iranian official.

He also described his two day visit to the Czech Republic and Slovakia as positive, and voiced hope that with joint projects, Iran will benefit from the expertise of the two countries.