Rouhani to ‘Discuss with Officials’ Results of Zarif’s G7 Talks 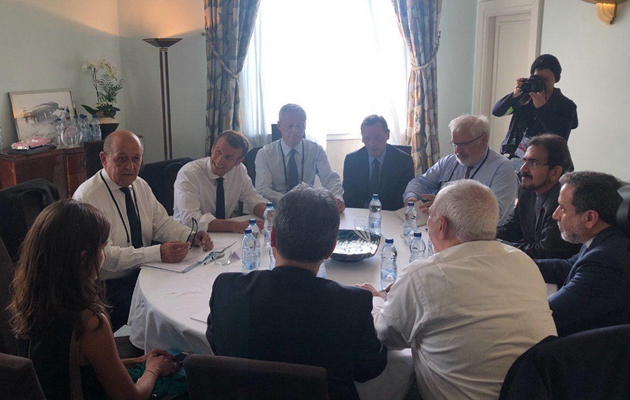 Iranian President Hassan Rouhani says he will consult with “relevant officials” today on the results of Foreign Minister Mohammad Javad Zarif’s recent trip to Biarritz, France, and his talks with European members of the G7.

“Both before his trip to France and after it, I have been in contact with Mr Zarif, and we will have consultations and discussions [on the issue] today with relevant officials,” Rouhani said in a Monday ceremony.

“We may tread a path and be 100 percent successful or not. We should do our job and take the measure, wherever there is a 90-percent or no, even a 10-20 percent chance of success; we should at least try and move forward. We should miss the chances,” Rouhani said.

His remarks were apparently a reaction to conservatives’ criticism of FM Zarif’s Sunday trip to Biarritz and his talks with French, German, and British delegations.

Zarif rescheduled his tour of three Asian states on Sunday, and made an unannounced visit to Biarritz at the invitation of French Foreign Minister Jean-Yves Le Drian.

According to the Foreign Ministry spokesman, the trip was aimed at following up on earlier initiatives by President Rouhani and his French counterpart Emmanuel Macron on the Iran nuclear deal.

“Met Emmanuel Macron on sidelines of G7 Biarritz after extensive talks with Le Drian & Finance Minister. Followed by a joint briefing for UK/Germany,” Zarif said in a tweet about his trip.

“Road ahead is difficult. But worth trying,” he added.

G7 leaders have agreed that French President Emmanuel Macron should hold talks and pass on messages to Iran.