Rouhani, Putin, Aliyev to Discuss Fight against Terrorism in Baku 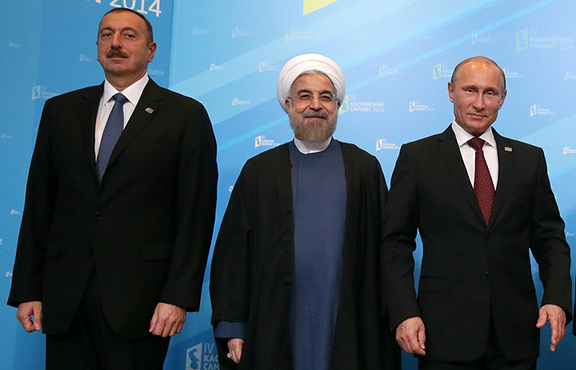 Iranian President Hassan Rouhani, Russian President Vladimir Putin, and the President of Azerbaijan Republic Ilham Aliyev will hold a trilateral meeting in Baku on August 8 to confer on various issues including the expansion of defence and security cooperation.

Heading a high-ranking delegation, Rouhani will leave Tehran for Baku on Sunday to hold key talks with his Russian and Azeri counterparts, Parviz Esmaeili, Rouhani’s deputy chief of staff for communications and information, said on Friday, August 5.

Esmaeili noted that the three presidents will discuss “trilateral cooperation in the fight against terrorism and such sectors as commerce, energy, communications, environment, and transportation.”

On the sidelines of the summit, the Iranian and Russian presidents will discuss issues of common interest and ways to strengthen cooperation, Press TV quoted Esmaeili as saying.

He further added that Rouhani plans to hold a meeting with Aliyev on Sunday and discuss the implementation of agreements previously signed between Tehran and Baku.

The Iranian and Azeri presidents will also exchange views about cooperation in different fields including commerce, industry, energy and culture six months after the two countries signed 11 agreements and memoranda of understanding in Tehran.

According to a report by IRNA, as translated by IFP, Iran and Russia have long had common interests in the Middle East and the Central Asia, and currently share interests in the ongoing crises in Syria, Iraq, Yemen, and Afghanistan.

The two sides have understood the importance of close defence and security cooperation, and it is now one of the top priorities in their agenda.

In a Friday interview with Azerbaijan’s state news agency Azertac, the Russian president hailed the cooperation among Iran, Russia and Azerbaijan in fighting terrorism and curbing drug trafficking.

“I believe there are also good prospects for intensifying interaction to counter terrorism and drug trafficking in a trilateral format,” Putin said.

According to a report by TASS news agency, as covered by IRNA, Putin stressed that the three countries are engaged in close dialogue on the issue.

He also said that Moscow and Tehran have similar key approaches and see additional opportunities in enhanced multilateral anti-terrorism cooperation within the Shanghai Cooperation Organization (SCO).

“Together with our Iranian partners, we are engaged in the Clean Caspian Sea operation aimed at cutting off drug trafficking routes,” the Russian leader further said.

Since 1960, Tehran and Moscow have put on their agenda the development of their military relations in an organized way. From 1963 to 1978, hundreds of military experts were sent from the Soviet Union to Iran, and 500 Iranian officers were sent to the USSR for higher military education.

Iran also used the Red Army’s help to construct plants in Isfahan and Shiraz for the overhaul of military equipment. Soviet experts also helped Iran build a grand centre near Tehran to renovate and rebuilt artillery warfare as well as armoured and military vehicles.

The Islamic Revolution in 1979 and the end of Iran’s role as the gendarme of Persian Gulf for the West provided the USSR with the opportunity to improve its ties with Iran; however, along with the US and the West, the USSR remained a major supporter of Iraq and its dictator Saddam Hussein in the war they imposed on Iran.

The deportation American advisors from Iran and the seizure of CIA’s intelligence centres – which were responsible for eavesdropping and observing the Soviets’ military activities – also contributed to the promotion of Tehran-Moscow cooperation.

From 1989 to 1991, a few years before the dissolution of the USSR, four intergovernmental contracts were signed between the Islamic Republic and the Soviet Union on technological-military cooperation. Based on these deals, $1.3bn of arms was sent to Iran, and tens of optimized choppers and portable anti-missile and anti-aerial systems were bought by Tehran.