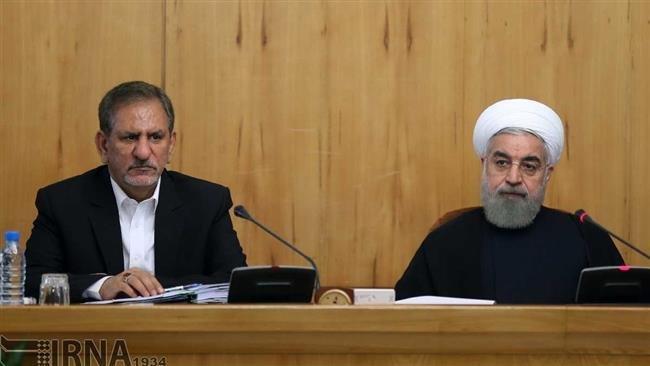 Incumbent President Hassan Rouhani and his deputy Es’haq Jahangiri, both presidential candidates, explain their future plans to deal with such issues as terrorism, tourism and economy as they defend their past performance in office.

Addressing Iranian expatriates in a televised program on Wednesday, Rouhani said the country would not let in “the virus of terrorism,” emphasizing the need to ensure national unity and ethnic amity as a means of deterring terror threats.

The Islamic Republic, however, is enjoying “exemplary” security thanks to the vigilance of its people and security forces and under the auspices of national integrity, Rouhani noted.

While ensuring security inside its borders, Iran has also contributed security in many countries such as Syria, Lebanon, Iraq, Pakistan and Yemen, he stated.

Rouhani said Iran is duty-bound to fight terror, and it is ready, if possible, to help promote security in countries far away like China and European countries.

The Iranian president further highlighted the significance of the Palestinian cause, reminding that the terrorism waged by such brutal outfits as al-Qaeda and Daesh had either consigned the issue of Palestine to oblivion or sidelined it.

“We should not let terrorism continue its course in the region. Towards confronting the phenomenon, the Iranian nation and government see it as its responsibility to take whatever measure in its power,” he added.

On a separate note, the Iranian chief executive said the number of foreign tourists visiting the country had increased by 12 percent under his administration.

He said cyberspace was now in the service of the tourism industry, noting that much of handicraft sales was now taking place using the Internet and social networks.

First Vice President Jahangiri likewise took on the issue of tourism on Tuesday, saying the country has everything it would take to turn up among the 10 countries attracting most tourists worldwide.

“We should move towards attracting foreign tourists, especially cultural tourists, who would visit the country for the purpose of pilgrimage. These bring along billions of dollars, contribute to the economy and create employment,” he said.

Iran, he said, had to reach a point when its exports would be valued at USD 50 billion or even more. To do this, the country had to enter the international markets “with an active diplomacy,” the official asserted.

The electorate will go to the polls on May 19.