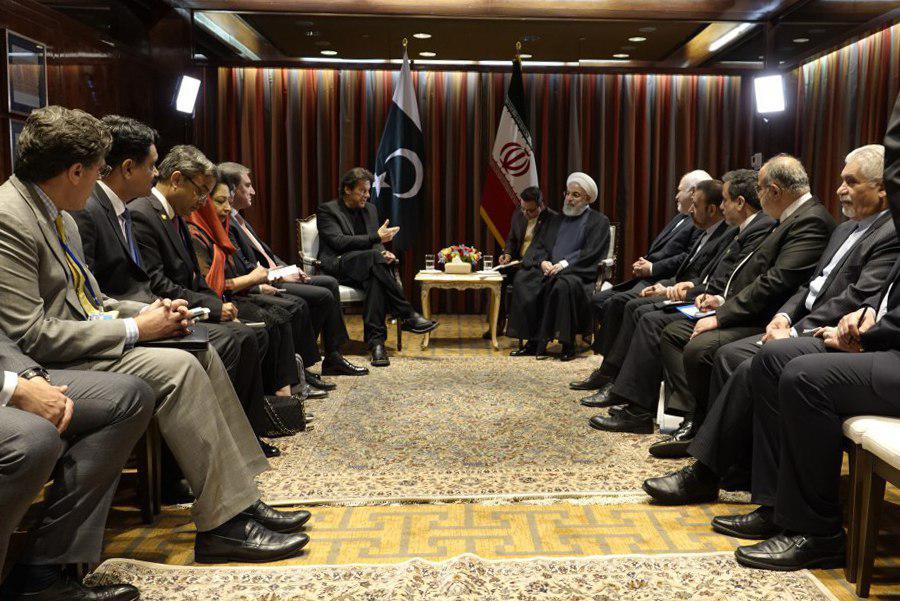 Iranian President Hassan Rouhani has held talks with Pakistani Prime Minister Imran Khan in New York on the sidelines of the 74th session of the UN General Assembly.

During the Monday meeting, the two sides conferred on bilateral relations, security along the two countries’ common borders, fight against terrorism, and restoration of peace and stability in the region.

President Rouhani underlined Iran’s resolve to continue good and constructive relations with Pakistan, and stressed the need to implement the agreements earlier reached in Imran Khan’s recent visit to Iran as soon as possible.

During Khan’s historic trip to Iran in April, the two countries agreed to form a joint force to eliminate terrorist groups, and Pakistan pledged not to join any coalition against the Islamic Republic.

“We agreed to step up security cooperation between the two countries and their respective border security and intelligence forces while also forming a joint rapid reaction force on the shared borders to fight terrorism,” Rouhani said at the time.

Iran also announced its preparedness to supply oil and gas to Pakistan and increase electricity exports to the country by ten-fold. It also expressed its interest in expanding trade between Iran’s Chabahar and Pakistan’s Gawader ports by connecting them with a railway.

In the Monday meeting in New York, the Pakistani prime minister in turn hailed the assistance Iran provided to his nation and government over the past decades, and expressed Islamabad’s preparedness for any cooperation with Tehran to ease tensions in the region.

He also extended his and the Pakistani nation’s special thanks to the Leader of Iran’s Islamic Revolution and other Iranian officials for their rightful and principled stances in support for the people of Kashmir.

Back in August, Iran’s Leader Ayatollah Seyyed Ali Khamenei called on the Indian government to adopt a fair policy towards the people of Kashmir.

Tensions in Jammu and Kashmir region escalated after India scrapped the special status of its portion of Kashmir on August 5. New Delhi claimed that the decision was necessary for Kashmir’s economic development and to stop “terrorism.”