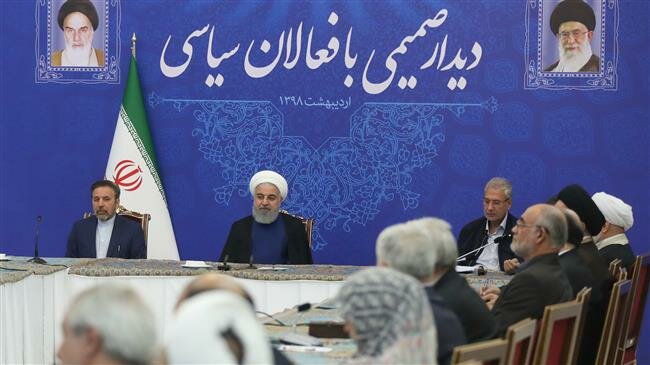 Iranian president Hassan Rouhani has said that Iran is facing an “all-out war” of economic and political pressures through sanctions imposed on the country.

Addressing a group of political activists in Tehran on Saturday, Rouhani said Iran needs unity and cohesiveness at the time of increased political and economic pressure which he described as unprecedented in the history of the country since the Islamic revolution of 1979.

Rouhani said the current wave of pressure on Iran is even more difficult than the one experienced during the Iran-Iraq war period.

“At the time of the war, we had no problem in banking, sale of oil and export and import and the only ban imposed on us was the arms embargo,” he said,

Rouhani said the outside pressure would never cause the Iranian nation to give up.

“Giving in is not consistent with our culture and religion and people won’t accept it, thus we should not accept submission and we should try to find a solution,” said Rouhani.

The comments came three days after Rouhani sent letters to representatives of major global powers in Tehran, notifying them of Iran’s decision to suspend parts of its commitments under a landmark nuclear agreement which was signed in 2015.

The move came exactly one year after US president Donald trump unilaterally withdrew from the agreement, known as the JCPOA, and started to pressure European parties to the deal to suspend their economic cooperation with Tehran.

In his letter to the ambassadors, Rouhani set a 60-day deadline for other parties to the JCPOA to either change the terms of the agreement or face Iran resume its nuclear enrichment program.