A robotic companion to ease the loneliness of the elderly 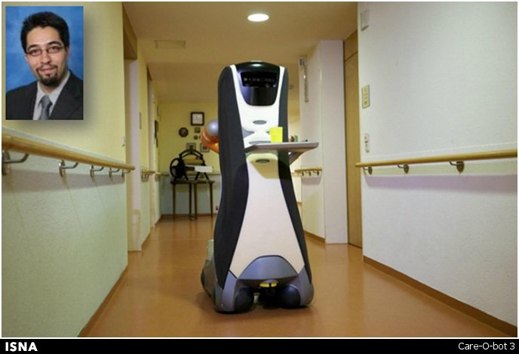 The ACCOMPANY project consists of a robotic companion as part of an intelligent environment, providing services to elderly users in a motivating and socially acceptable manner to facilitate independent living at home. The ACCOMPANY system provides physical, cognitive and social assistance in everyday home tasks, and contributes to the re-ablement of the user, i.e. assist the user in being able to carry out certain tasks on his/her own.

On February 8, the Iranian Students News Agency filed a report that a prototype of the service robot has been made. The following is the translation of the report that the agency posted on its website:

The robot uses a state-of-the-art service robot platform, Care-O-bot® 3 to assess user requirements and user acceptance of the robot.

Dr. Farshid Amirabdollahian, a reader (associate professor) in adaptive systems at the school of Computer Science, the University of Hertfordshire, coordinates the 5-million-euro project called ACCOMPANY, which brings together nine centers from five European countries.

Over the last three years, the research team has carried out extensive research at the University of Hertfordshire. One of the achievements of the team is the recognition of activities and the situation of people in an intelligent atmosphere as well as concentration on the ability of the robot to remember events.

The project results showed that a service robot could potentially lift the individual out of loneliness and encourage stimulatory responses while independence of an individual is preserved.

Dr. Amirabdollahian stressed that the project had substantiated the possibility of befriending a robotic companion as it underscored the necessity of concepts such as empathy, emotions, social intelligence and morality to lead an independent life.