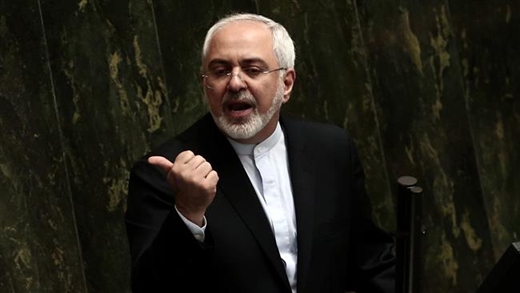 Zarif was in parliament along with the nuclear chief to brief parliamentarians on the Joint Comprehensive Plan of Action (JCPOA) concluded between Iran and P5+1 on July 14.

Iran’s Foreign Minister Mohammad Javad Zarif says the issue of reversibility to the conditions before a recent agreement between the Islamic Republic and the P5+1 is not just an option for Iran’s international partners but also for Tehran.

He said that even a potential vote for the return of the sanctions at the UNSC through a veto will be costly for the UNSC as world countries have little regard for resolutions approved with a veto.

Zarif and Director of the Atomic Energy Organization of Iran (AEOI) Ali Akbar Salehi participated in the open session of the chamber to brief parliamentarians on the Joint Comprehensive Plan of Action (JCPOA) concluded between Iran and P5+1 on July 14.

The mechanism for the restoration of sanctions that Zarif was talking about is one under which any of the six countries in the P5+1 can raise what it considers as violation of the nuclear agreement by Iran; the issue would then be referred to dispute resolution panels, whose deliberations can take up to 30 days or more. On the thirtieth day, and as issues remain unresolved, the sanctions would automatically be re-imposed.

The process cannot be interrupted except by a majority vote in the Security Council. But any of the five permanent members can use its veto power to ensure that the re-imposed sanctions remain in place.

Minutes after the opening of remarks by Zarif, the text of the JCPOA and its annexes were submitted to the chamber for review.

After his opening remarks, Zarif replied to some questions from the MPs asked through Speaker Ali Larijani.

Zarif said that the Iranian negotiators in the talks that led to the conclusion of the JCPOA proved that the Islamic Republic is ready to negotiate but will not allow the “six ostensibly powerful countries” to resort to extortion.

He said the negotiators made it clear to the six countries and the European Union (EU)’s high representative that “no one can ever threaten an Iranian.”

The Iranian foreign minister, who was Iran’s top negotiator at the talks, said it was also made clear to the world that enrichment and related research and development will never stop in Iran.

Zarif said it is no wonder that, angered by the conclusion of the JCPOA, Israeli Prime Minister Benjamin Netanyahu raises a hue and cry and appeals to the US Congress to torpedo the agreement, which will seriously threaten the Israeli regime.

“The much-hated Zionist regime (Israel) has never been this much isolated among its [own] allies,” the top Iranian diplomat said.

Iran achieved its main objectives under the JCPOA, Zarif said, enumerating them as “maintaining Iran’s dignity and might, establishing the nuclear program [of the country], enrichment and retaining the heavy-water reactor.”

He also referred to the termination of sanctions imposed against the Islamic Republic and previous UN resolutions that had “not only imposed sanctions on Iranians, but had also forbidden Iran’s nuclear program and turned into international duty the prevention of the enhancement of Iran’s missile capabilities.”

“For the opposite side,” Zarif said, “the key goal was preventing Iran from obtaining nuclear weapons,” which the Islamic Republic was already not seeking.

“Ensuring this obvious issue (that Iran doesn’t build nuclear bombs) is no special privilege,” Zarif said, “since, based on religious and human principles and the fatwa by Leader of the Islamic Revolution [Ayatollah Seyyed Ali Khamenei], Iran has never been and never is after nuclear weapons.”

Smaller concessions for bigger ones

Zarif further said, “We have never claimed and do not claim that the JCPOA is completely to the benefit of Iran; I emphasize that negotiating is basically giving [something] and taking [something in return], and unless a significant level of the two sides’ demands are met, no agreement is reached.”

“In order to meet our demands,” he said, “we have had certain flexibility concerning restrictions and monitoring; this flexibility has been goal-oriented and well-calculated.”

There to testify to great achievement

Following the remarks by the Iranian foreign minister, Salehi started an address to the parliamentarians.

Salehi said he had come to parliament to testify that what Iran has achieved in terms of the technical issues of the agreement between Iran and the P5+1 constitute a great feat, and that, as a person who has been involved in the nuclear field for over forty years, he takes full responsibility for the technical aspects of the agreement.

The top Iranian nuclear official said that, while the provisions of the agreement are meant to be “restrictions” on what the P5+1 says is Iran’s path to atomic bombs, the country’s nuclear sector has not been restricted in a real sense because the Islamic Republic has never sought to build such weapons.

Salehi, too, responded to a number of questions handed over in written form to Speaker Larijani regarding the agreement.