Resistance of Iranians brought the other party to the negotiating table 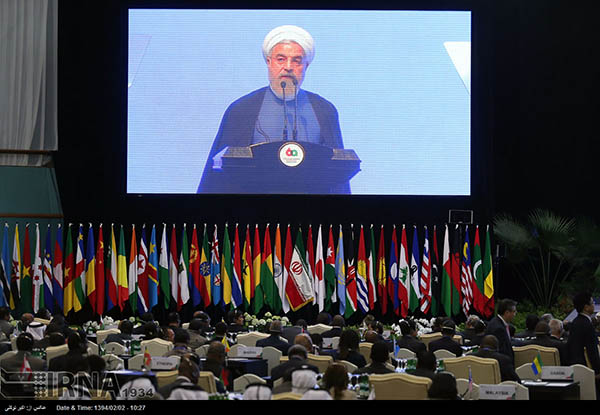 The Iranian president has rejected differentiation between good and bad terrorism, saying that we need to identify and eliminate the elements that help terrorists lure the youth.

President Hassan Rouhani has rejected as unlawful and unjust the sanctions imposed against the Islamic Republic of Iran, saying that the resistance by the Iranian nation together with the accelerated pace of the country’s technological and peaceful nuclear progress finally brought the other side [P5+1] to the negotiating table.

The Iranian president made the remark Wednesday in an Asian-African Conference (AAC) in Jakarta, Indonesia. The following is a partial translation of what else the president said in his speech as reported by the Islamic Republic News Agency:

Rouhani said that P5+1 opted for talks with the Islamic Republic knowing that threats, disrespect and sanctions fail to create peace and security [in the world].

“Intensive, complicated and prolonged talks were held and now I am happy to announce that the constructive interaction which has been established in the talks can culminate in a final nuclear deal,” he added.

The Iranian president further said that the final deal should guarantee Iran’s right to peaceful nuclear energy as well as the removal of all economic sanctions.

“Here I announce that Iran aims to have constructive interaction [with the rest of the world] and I insist that such interaction will serve our interests and those of all world nations,” he said.

Rouhani went on to say that in addition to efforts to seriously combat extremism and terrorism, measures should be taken to identify and eliminate the elements by which terrorist groups lure and recruit people [from around the world] to their ranks.

The cultural and economic root causes of such aggressiveness [terrorist acts] and desire for violence should be identified, he said, adding that honest, well-intentioned measures are needed to solve economic problems, dispense justice, and counter efforts which promote violence among the youth in order to deny terrorists the opportunity to provoke tension and misuse people.

The president said that we have to stem the tide of terrorism by cutting the financial, political and intelligence supply lines of the terrorists, adding that the global message of fighting international terrorism will not catch on as long as certain governments distinguish between good terrorism and bad terrorism.

International terrorism will stay undeterred and unharmed so long as it emerges under a different name and is supported by a different government, he added.