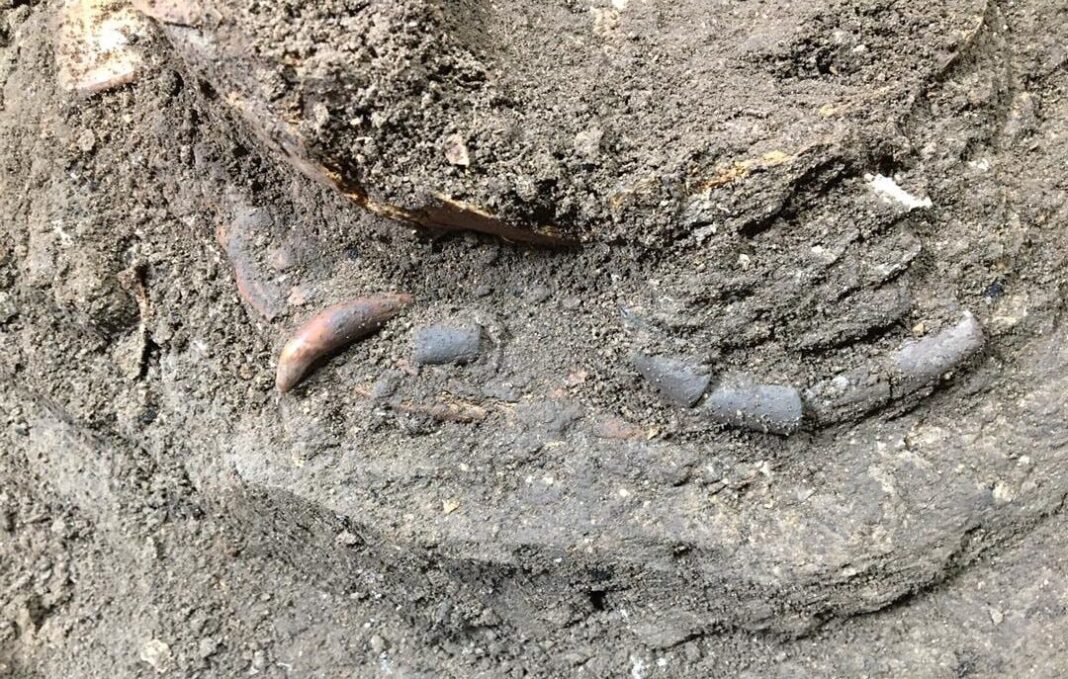 Archaeologists have found one-of-a-kind traces of pre-historic hunter humans during exploratory work at Hotu cave in the northern province of Mazandaran.

The director general of Cultural Heritage, Tourism and Handicrafts Department of Mazandaran Province said the exploration team, led by Hassan Fazeli Nashli, found the skeleton of a child while scanning the lower layers of the Hotu cave. Seifollah Farzaneh said the child is buried in a sitting position and has a necklace of wolf teeth around her neck, which is the first archaeological discovery with such adornments.

“The discovered skeleton belongs to a six to eight-months-old infant and dates back to the epipaleolithic period, which goes back more than 12,000 years,” Farzaneh said.

“Based on the report by the head of the archaeological team all main parts of the infant’s skull are painted red with ocher and a necklace seems to be wrapped around its neck twice. Three teeth belonging to a predator, probably a wolf, are also discovered among the neck vertebrae, which in terms of precedence in Iran, are among the oldest archaeological finds on hunter gatherers with such adornments.”

The official also said the research team believes no such rich evidence on hunter humans has previously been found in Iran. He further explained that two archaeologists, Hamed Vahdati-Nasab and Hassan Fazeli Nashli, each had previously found a single wolf bone during exploration of Komishan cave and its archaeological site. But he said these were not obtained from inside graves and were spotted on their own within cultural layers.

Farzaneh also said the noble burial should apparently be considered a manifestation of one of the most sentimental episodes of the life of hunter humans in Mazandaran Province.

Hotu and Kamarband caves are among the most famous archaeological caves of Iran. They are located near the city of Behshahr and next to Shahid Abad (Trojan) village, which lies on the slopes Alborz mountain range. These caves were first discovered and explored by a team of American archaeologists from Pennsylvania University, headed by Carlton Kon. The caves are significant as they put on display the dwellings of the last cave dwellers in Iran just before the ruralism period began. Hotu and Kamarband caves contain archaeological layers from Epipaleolithic, Neolithic, Chalcolithic periods as well as the Stone Age and Iron Age and Parthian Period.