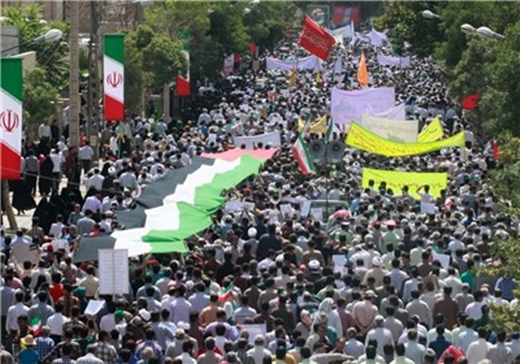 The Iranian Foreign Ministry has said that resistance is the only way to protect the rights of Palestinians and to liberate the occupied Palestine and the holy Quds.

A couple of days before International Quds Day, the Iranian Foreign Ministry stressed that the restoration of the rights of the Palestinian people would result in sustainable peace in the region.

Sustainable peace in the Middle East cannot be realized unless the innocent people of Palestine would claim their full rights, the Foreign Ministry said in a statement on Wednesday.

Fulfilling this objective requires strong opposition to the Zionist regime’s aggression and excessive demands, and the empowerment of Palestinians in their resistance, the statement added.

The statement went on to say that “resistance is the only way” to protect the rights of Palestinians and to liberate the occupied Palestine and the holy Quds.

Iran’s Foreign Ministry also invited the Iranian nation to take part in the rallies due to be held on Friday on the occasion of International Quds Day.

Millions of people in Iran as well as other countries in the world are expected to hold massive rallies on Friday to show their solidarity with the Palestinian people and the cause of Palestine.

The event’s overarching theme is the support for the Palestinians and fierce denunciation of Israel.

It is seen as an opportunity for freedom-seeking people across the world, regardless of faith, to voice their support for the cause of Palestine and vent their anger against the Apartheid regime of Israel, which has occupied Palestinian territories since 1967.