Secretary of Supreme National Security Council of Iran Ali Shamkhani has welcomed the withdrawal of US forces from Afghanistan saying the nations in the region are counting seconds for the complete withdrawal of the US from West Asia.

The senior security official said in a meeting with Afghan President Ashraf Ghani in Kabul on Wednesday that regional nations are counting seconds for the complete withdrawal of US forces whose presence has resulted in nothing but war and insecurity.

Shamkhani was referring to the Trump administration’s order to start withdrawing roughly 7,000 troops from Afghanistan in the coming months, an abrupt shift in the 17-year-old war there.

The SNSC secretary said the withdrawal of the US forces provides Afghanistan with a golden chance to improve domestic military capabilities and restore peace in the country, IRNA reported.

In the meantime, Afghan groups should engage in constructive talks and avoid violent moves in the region to pave the way for peace, he said.

He stressed that the regional countries should be vigilant to fight Takfiri terrorists in the region.

“The enemies of the region’s security and calm are looking to destabilise common borders to transfer defeated ISIS elements to Afghanistan and support Takfiri terrorism in this country so they can fuel war, bloodshed and insecurity in the region,” he said.

“Any negligence could result in a repeat of bitter and horrendous incidents, similar to what happened in Iraq and Syria,” he said.

In turn, Ghani said protecting peace in border areas is a top priority for Afghanistan, stressing the need for creating shared mechanisms to fight terrorism, organized crime and drug trafficking.

Ghani added that his government seeks to strengthen bonds of friendship with the Iranian nation adding that making efforts to boost economic ties in various fields particularly transit and trade would guarantee sustainable cooperation between the two countries.

In a separate meeting later in the day, Shamkhani told Afghanistan’s Chief Executive Abdullah Abdullah that Iran supports the peace process and intra-Afghan talks in the country. 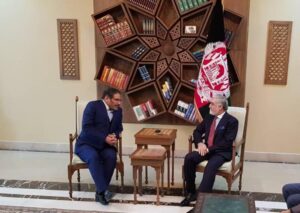 The SNSC secretary said regional governments need to engage in cooperation to devise inclusive plans to root out terrorism, as the scourge could continue to threaten the region in the coming years.

Abdullah said he welcomes Iran’s initiatives to fight terrorism and restore peace and security to the region.

“Sustainable peace is the most important need of the region and the ground for economic progress and development of the suffered nations,” he said.