Reactions to an Overnight Attempt to Arrest Iranian MP 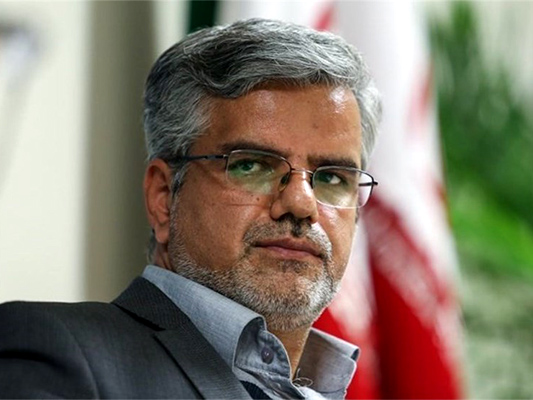 An attempt to arrest the reformist Iranian lawmaker Mahmoud Sadeqi on Sunday has sparked great controversy during the past few days in Iran.

According to media reports translated by IFP, Mahmoud Sadeqi, the outspoken member of Iran’s Parliament, was at his home in Tehran when police officers came to arrest him with a warrant issued by Prosecutor General of Tehran.

Sadeqi showed resistance by closing the door and did not allow the officers to detain him. However, they stayed there for a while and waited for a permission to legally enter his house.

However, Mohammad Javad Fathi, another reformist lawmaker, told ILNA that officers finally decided to leave the place after a phone call by Parliament Speaker Ali Larijani.

In a short interview with Qanoon Daily on Sunday night, Sadeqi said the officers had an arrest warrant that accused him of ‘publishing lies and insulting with the aim of disturbing public opinion’.

He said he believed that the warrant had been issued because of his earlier remarks against the Judiciary’s bank accounts.

Sadeqi was referring to his question from Economy Minister Ali Tayyebnia, in which he asked for explanation about the Judiciary’s controversial bank accounts in Bank Melli of Iran.

However, his question and remarks were harshly responded by Judiciary Chief Ayatollah Sadeq Amoli Larijani. The Judiciary Chief said the reformist MP had ‘shamelessly’ raised accusations against the head of Iran’s Judiciary, and Parliament Speaker and President did not show any reaction to such claims.

Warrant for Arresting an MP: Legal or Illegal?

Sadeqi says he told the officers that their warrant was illegal according to the Law on Parliament Supervision over Conducts of Representatives.

“If a lawsuit is filed against an MP, the Judiciary is obliged to communicate it to the Parliament’s Presiding Board so that the complaint is discussed in the Parliamentary Board for Supervision over Conducts of MPs,” Sadeqi, himself a Professor of Law and lawyer, said.

He says he has yet to receive any private or public complaint, whether through the Prosecutor or the Parliament’s Presiding Board, and the arrest warrant showed that it had not been issued for a private complaint.

ICANA quoted Motahari as saying on Monday, “We see that an MP criticizes the Judiciary and is immediately indicted. This is while the MP has just asked for explanation about an issue.”

Issuing Arrest Warrant for Sadeqi Was an Insult to Parliament

The first vice-speaker of Parliament Massoud Pezeshkian also said in a post on his Telegram channel that the overnight attempt to arrest Dr. Sadeqi was an unusual move and an insult to the Parliament.

“All authorities are expected to show more restraint and at least respect the Parliament’s dignity by observing the legal procedures,” he noted.

“The law does not treat individuals differently, but people may be summoned in different ways,” he noted.

“It does not make any difference who has committed the crime; several private complaints had been filed against him [Sadeqi], and the Prosecutor, himself, filed two lawsuits against him, which are being investigated,” Ejei added.

After Sadeqi was not detained on Sunday night, there were allegations that the arrest warrant was nullified; however, prosecutor general of Tehran says the warrant remains in force.

“The arrest warrant issued by Court of Culture and Media was based on legal procedures and is still enforceable,” Abbas Jafari Dolatabadi told reporters on Monday.

“In Mahmoud Sadeqi’s case, there are eight public complaints and three public indictments, which have been communicated to the Parliament and Tarbiat Modarres University [where Sadeqi works],” Jafari Dolatabadi added, as reported by IRNA.

“To ensure that Mahmoud Sadeqi will appear in the court, Parliament Speaker Ali Larijani was informed on Saturday of the need for Sadeqi’s presence, and Mohammad Ali Vakili, a member of the Parliament’s Presiding Board, was also contacted for several times in this regard,” he went on to say.

“Since Sadeqi refused to appear in the court in spite of the summons and had several interviews, which revealed he was aware of the summons, the prosecutor issued an arrest warrant for him,” Jafari Dolatabadi noted.

“Given his field of education [law], Sadeqi is well aware that all individuals are legally equal based on Iran’s Constitution, and the immunity the defendant has referred to only applies to the remarks MPs make as a representative, and does not apply to the crimes they commit while doing their job,” he stressed.

Lawmakers Do Not Have Absolute Immunity: Jurist

Nejatollah Ebrahimian, a jurist member of Guardian Council, says MPs in Iran are immune from prosecution for the remarks they make while doing their job as a representative, but the immunity is limited and restricted to the conditions outlined in the Constitution.

“For example, if a lawmaker uses swearwords against someone during his or her speech, this has nothing to do with his responsibilities as an MP. Or a lawmaker may commit homicide or kill someone in a car crash; all these cases can be prosecutes,” he noted, as reported by Khabar Online.

“In Iran, the Parliamentary Board for Supervision over Conducts of MPs is a mechanism aimed at avoiding frequent prosecution of MPs for their remarks; however, this does not mean absolute immunity,” Ebrahimian reiterated.

Sadeqi on Tuesday appeared in the court in a voluntary move according to Mohammad Reza Tabesh, a reformist MP.

Tabesh told ISNA that Sadeqi discussed the issue with the judge and he was told that the complaints will be communicated to the Parliamentary Board for Supervision over Conducts of MPs.

However, the Judiciary’s news agency Mizan says the interrogator asked him about the accusations, and finally released him on bail.