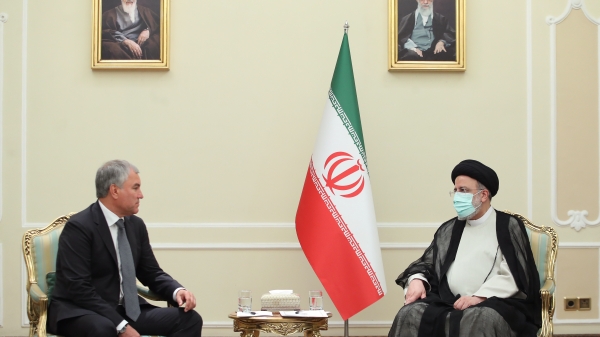 In a meeting with Chairman of the Russian State Duma Viacheslav Volodin in Tehran, the Iranian president expressed hope the document on comprehensive cooperation between the two countries will be finalised to pave the way for ever closer cooperation.

He said there are no impediments to the all-out expansion of ties between the two countries.

“We are pleased to see Russia’s economic progress and development in line with self-reliance, and we are set to best implement resistance economy policies aimed at reinforcing our resistance against economic blows, especially the United States’ cruel sanctions,” said Raisi.

Volodin, in turn, expressed congratulations to, and wished success for President Raisi and his administration on behalf of himself and his country’s president Vladimir Putin.

Volodin highlighted the need to upgrade the level of Iran-Russia cooperation on all fronts and expressed the Russian State Duma’s readiness in that regard.

He said he will convey to his Russian counterpart President Raisi’s proposal on finalisation of the document on comprehensive cooperation between the two countries.

The top Russian parliamentarian noted his country has always been keen to expand its cooperation with Iran in all areas.

He, however, said Tehran-Moscow relations have yet to reach the desired level, adding he will make every effort to boost mutual parliamentary relations.

He said sanctions against Iran and Russia are aimed at undermining the two countries, adding the two sides can work together to enhance their transactions and overcome that hurdle.