Put an end to discussions over the Iran nuclear deal 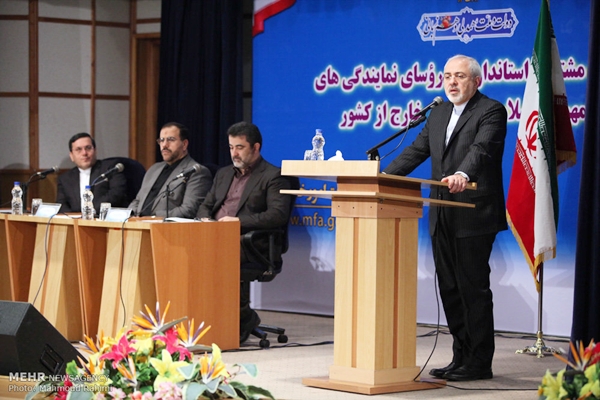 Zarif has said that time has come for us to make maximal use of JCPOA, adding we should focus on the ways to seize the post-JCPOA opportunities to serve our national interests.

Mohammad Javad Zarif has said that the Joint Comprehensive Plan of Action is now behind us, calling for an end to discussions surrounding JCPOA.

The foreign minister made the comment on Monday in a joint meeting of governors general from across the country and heads of Iran’s diplomatic missions abroad and added that JCPOA gets a low mark [5 out of 100] when looked at through a pessimistic lens and a high mark [95 out of 100] when viewed through an optimistic lens. “If we fail to seize the opportunity that has arisen in the wake of JCPOA, the mark will plummet to zero. If we get involved in bickering, we will get neither 5 nor 95.”

The following is the translation of what else Zarif said in the gathering as reported by alef.ir on November 9:

We should take into account the timing of the Iran nuclear deal and the country’s conditions if we seek to review JCPOA. In 2011, Iran sold 2.5 million barrels of oil per day, that figure dropped to 900,000 barrels two years later. The enemy was trying to push down Iran’s oil sales even further. Iran’s oil exports would have been somewhere in the neighborhood of zero if Iran and P5+1 had not inked the Geneva Agreement and the Joint Plan of Action.

Some close their eyes to realities on the ground and pay no heed to the fact that Iran’s economic growth began to slip into negative territory back in 2011 [-6 percent]. Now the Joint Comprehensive Plan of Action is over, whatever it was. I recommend those supporting the government stop discussing JCPOA because we need to tap into collective measures, reach a national consensus and seize the post-JCPOA opportunities.

We should not fight over ‘infiltration’. We are all following the Supreme Leader’s guidelines and are concerned about infiltration [of outsiders]. The Foreign Ministry is meticulously monitoring foreigner shots at infiltration. We believe that the best way to counter infiltration is to take the initiative. Time has come for us to seize the initiative and make maximal use of the Joint Comprehensive Plan of Action.

We are all anxious to seize the post-JCPOA opportunities to serve the interests of the public, the country, the establishment and the revolution. The Supreme Leader has repeatedly talked about the threat of infiltration and abuse by the revolution’s ill-wishers [of the nuclear deal].

JCPOA can turn into an opportunity for us, but we will face grave dangers if we lack planning and vigilance, and get involved in infighting rather than trying to take the initiative. We should not let domestic differences play into the hands of the ill-wishers.

Today the ill-wishers and even Iran’s regional friends have become agitated and terrified, because their long-term investment and plans to portray Iran as a country in which a security-charged atmosphere prevails have produced no results. They are scrambling to stop their plans from failing. That’s why we need to make thoughtful planning on that front.

The threat of extremism and sectarianism has its roots in shortsighted and flawed policies of certain regional and international players. Today violent groups which have grown in the region act in the name of Islam and ideologically influence teenagers and young adults.

The barbaric crimes these groups commit are not logically acceptable. These groups pose a security threat to the entire world, but certain countries in this region have not yet realized the threat of extremism. As long as they do not accept the fact that such a threat exists, Takfiri groups will be given extensive support by certain institutions within sovereign states in the region.

Iran’s ambassadors and governors general can have consultation to review different aspects of extremism threat, offset such a threat and stop sectarianism, tribalism and Shiite-Sunni divisions from growing. We need consultation and like-mindedness in this regard.