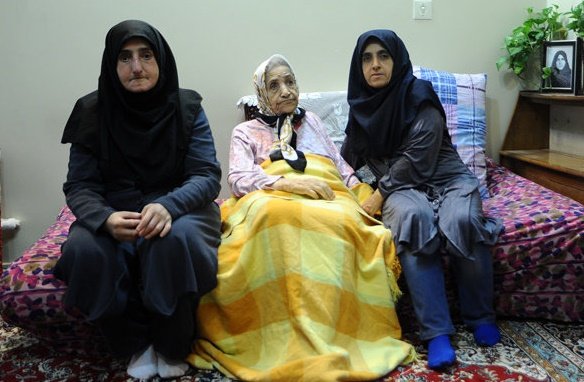 In spite of disabilities, the two sisters have proved that they are the best of nurses for their ailing mother.

Looking after an ailing parent is not all that strange, but when people with disabilities do that, their work takes on additional importance.

The following is a partial translation of a report by Mehr News Agency on April 20 about two caring sisters who can neither see nor hear but look after their ailing mother.

Zahra, 55, and Fatemeh, 44, are two sisters who hold each other’s hands every day and jog in a park near their house. Razieh Hosseini, who has been their only friend and trainer for a few years, drops by daily to see how they and their old mother are and give them a hand if necessary.

As for abilities, the only difference between the two sisters is that unlike Zahra who is totally blind, Fatemeh has very poor eyesight. The slight vision helps her take care of housework.

The only way of communication between the two sisters goes through their palms. To convey a message to them, you have to write the words on their palms. When you make yourself understood, it’s your turn to build on their body language and decode their response.

When the sisters want to talk together, they hold each other’s hands and make some movements that others don’t understand, but each movement has a meaning for them.

They also go shopping and do the cooking. Their house is always filled with the pleasant smell of home-made food at noon.

Fatemeh wanted to get married and start a family when she was young, but she no longer thinks about it. All she wants is to put all her efforts into looking after her mother.

The mother had never let her girls feel depressed because of their disabilities. When she was young, she would take them to school and gym and emotionally support so that they wouldn’t feel down. Now it’s the girls’ turn to repay their mother’s kindness.

Zahra and Fatemeh have a small green garden in their yard. It’s hard to understand what their perception of natural beauty is, but it’s obvious that they truly appreciate beauty; at least their garden reflects their deep understanding of aesthetics.