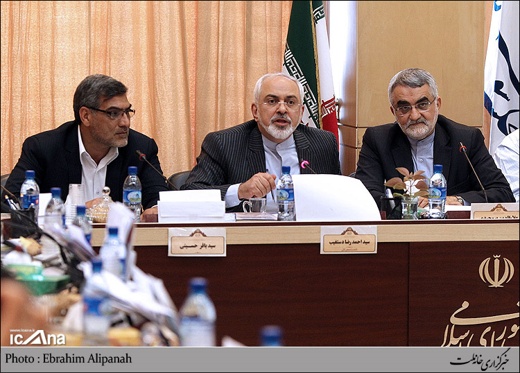 A principlist website says there were three main problems associated with a parliamentary committee session attended by Foreign Minister Zarif and its coverage by IRIB.

Alef, a news website run by Ahmad Tavakoli, an influential principlist MP and a onetime presidential candidate, published an opinion piece by Hamid Safari on the parliamentary committee session. The following is a partial translation of the piece:

There were three main problems associated with the meeting and its coverage.

First, the National Security and Foreign Policy Committee allowed MPs who did not have a seat on the committee to take part in the session and pose probing questions to the representative of the establishment – and not the policymaker – and level baseless allegations against him. […]

Second, for the first time, images of a closed-door session on one of the biggest challenges facing the establishment over the past 36 years were aired by the national broadcaster.

At a time when the Supreme Leader is urging all political factions to throw their weight behind the nuclear negotiators, images of wrangling hit the small screen, suggesting there are deep divisions and tension in the country over such a vital issue. Such images could send the wrong message to the other party and the enemies of the Islamic system.

Third, Islamic Republic of Iran Broadcasting repeatedly aired a report on the meeting which seemed to have given undue prominence to the anger of the foreign minister. Besides, even though the foreign minister was under pressure, he should not have thrown a tantrum.

Certainly the Iranians expect their top diplomat to be more patient, because the three-month period that lies ahead is more difficult than the past 18 months. The negotiating team has a heavier burden to shoulder and is likely to come under more criticism.