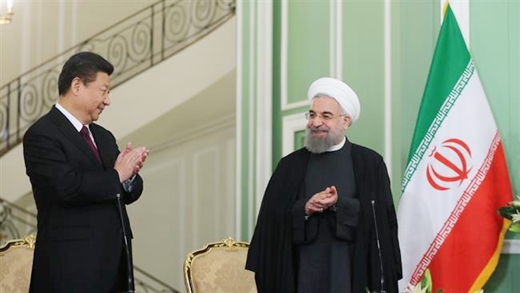 “The important visit by … President Xi Jinping…marks an important historic event and I am sure that a new chapter has started in relations between Iran and China,” Rouhani said alongside Xi in Tehran on Saturday.

Rouhani said that the Islamic Republic welcomes stronger ties with China particularly after the recent lifting of international sanctions on Iran.

He also said Iran and China have agreed on more cooperation to “combat regional terrorism.”

He said he and his Chinese counterpart discussed cooperation for “creating stability and security in the Middle East and helping countries plagued by terrorism, including Afghanistan, Iraq, Syria and Yemen, and providing intellectual and intelligence assistance in the fight on terrorism.”

For his part, Xi said he has traveled to Iran to prepare the ground for a new “prospect in relations between the two countries.”

He noted that Iran-China strong cooperation will not only benefit the governments and nations of the two countries, but also would serve “regional and global peace.”

Iran and China signed 17 documents for cooperation in economic, industrial, cultural and judicial fields in the presence of the two countries’ presidents.