President: Unjust UNSC resolutions against Iran to be terminated soon 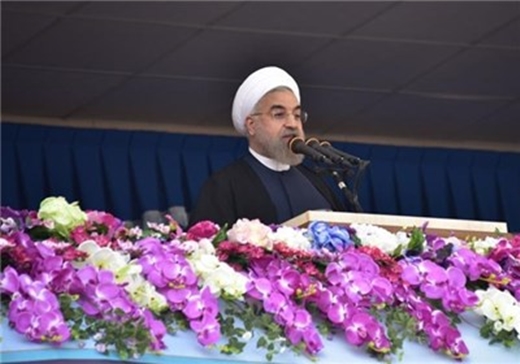 President Rouhani has said that Iran will continue to increase production and exports after the sanctions are lifted.

President Hassan Rouhani blasted all sanctions imposed by certain Western countries against Tehran, including the United Nations Security Council anti-Iran resolutions, as “unjust”, saying that the sanctions regime will come to an end in the near future.

“With the support of the people and the guidelines of Supreme Leader of the Islamic Revolution (Ayatollah Seyyed Ali Khamenei), we will terminate the unjust resolutions in the not-too-distant future,” President Rouhani said, addressing a large gathering of people in Iran’s southern province of Fars on Wednesday.

He hailed the performance of the Iranian team involved in the nuclear negotiations with six world powers, saying that the negotiators are properly defending the Iranian nation’s rights with the power of “logic and legal reasoning”.

The president further pointed to the positive effects of the removal of sanctions on Iran’s economy, saying that the country will continue to increase production and exports to the region and the world after sanctions are lifted.

“We should open doors to the country’s prosperity,” he noted.

His remarks came as Iran and 5+1 (Russia, China, the US, Britain, France and Germany) reached a framework nuclear agreement on April 2 in Lausanne, Switzerland, with both sides committed to push for a final deal until the end of June.

The framework provides a series of solutions to the differences that will be the basis of a comprehensive Joint Plan of Action.

According to the framework agreement, the nuclear-related sanctions imposed on Iran by the UNSC, the European Union and the US will be removed.