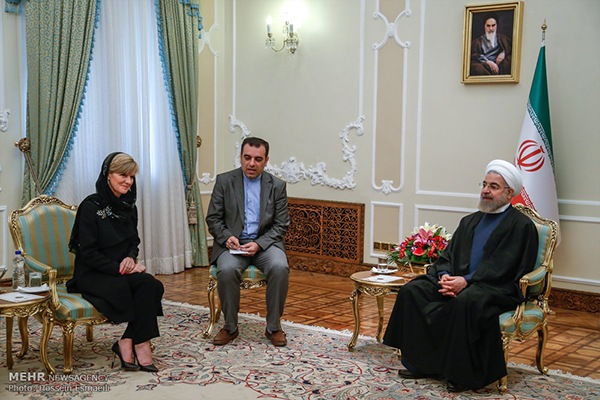 President Rouhani pointed to the spread of terrorist groups in the world and said Iran is ready to cooperate with all countries, including Australia, to combat terrorism and extremism.

Iranian President Hassan Rouhani criticized the international community’s inaction on the ongoing catastrophe in Yemen, stressing that the crisis should be resolved politically not through bombing defenseless people.

The Yemeni crisis should be resolved through political means, President Rouhani stressed Saturday in a meeting with Australian Foreign Minister Julie Bishop here in Tehran, adding that dropping bombs on defenseless people will yield no results.

He suggested that the UN could dispatch a fact-finding mission to Yemen to see for themselves that most of those killed in over 20 days of Saudi-led attacks on the war-torn country are innocent civilians.

The Iranian chief executive expressed deep sorrow over the international community’s failure to take action to resolve the Yemeni crisis, saying that there are many hurdles hampering even the transfer of humanitarian aid, including food and medicine, to Yemen.

“We are ready to consult and interact with” countries in the region and beyond and “try our best” to help stop the bloodshed, he further stated.

Rouhani pointed to the spread of terrorist groups in the world and said the Islamic Republic is ready to cooperate with all countries, including Australia, to combat terrorism and extremism.

The Australian foreign minister, for her part, hailed the longstanding relations between Tehran and Canberra and emphasized the necessity for efforts to boost bilateral cooperation in all spheres.

Julie Bishop is Australia’s highest-ranking official who has visited Iran in the past 12 years.