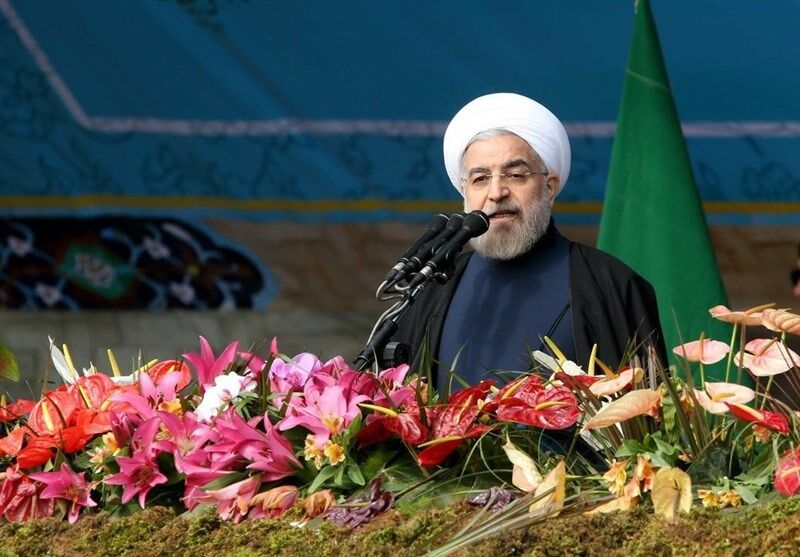 President of Iran Hassan Rouhani has dismissed the American “lie” that top Iranian commander Lt. General Qassem Soleimani was after a war in the region, saying the martyr was contributing to regional stability and helping the nations.

President Rouhani made the remarks on Tuesday in an address to a large gathering of people in Tehran marking the 41st anniversary of victory of the Islamic Revolution.

In his speech, the president paid tribute to Lt. General Soleimani as a “commander of battlefield” and a “senior diplomat in the negotiations”, saying the popular commander was assassinated by the US on his way to a meeting with the prime minister of Iraq.

General Soleimani was heading towards the field of diplomacy, not the battlefield, when he was martyred in the US airstrike, the president said.

Highlighting the late Iranian commander’s support for the people and armies of Iraq, Syria and Lebanon, the president said Lt. General Soleimani endowed the region with security.

The president further highlighted the far-reaching impacts of victory of the Islamic Revolution in 1979, saying it is natural for the US to be enraged by the victory of a great nation and being evicted from Iran.

“It is natural that the US has been dreaming about a return to this land every night during the past 41 years,” Rouhani added.

Describing the Islamic Republic as the most powerful country in the Middle East, the president said, “They (Americans) are well aware how important Iran is. They know very well what the role of Iran in the region is, and they know that Iran’s power in the region is one of the greatest powers, or in fact, the top power in the delicate Middle East region.”

The president also expressed gratitude to the Iranian Armed Forces for fulfilling the national request for revenge against the assassins of Lt. General Soleimani, saying the IRGC missile attack on the American base of Ain al-Assad in Iraq was a public demand.

President Rouhani finally called for stronger national unity against the enemies, saying, “Whenever we stood together, the US has been defeated… Our strategy is being all together. All of us must defend this country together. We must all stand against the US and must protect the Iranian nation’s rights together. The Revolution belongs to all (Iranians), not a specific individual or group.”