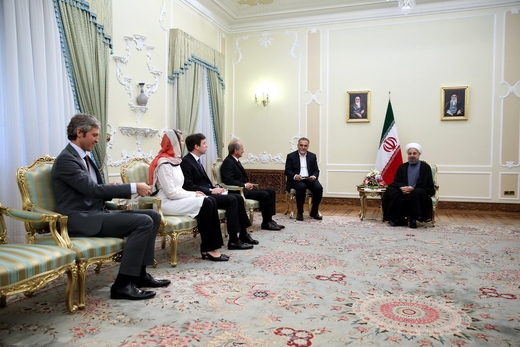 The President made the remarks in a meeting with new French Ambassador to Tehran Francois Senemaud. The ambassador formally submitted his credentials to President Rouhani.

“A new chapter has been opened in relations of the two countries,” President Rouhani said, reiterating that the implementation of the joint agreement would broaden mutual relations.

Touching upon the vast untapped potential and capacity between the two countries, President Rouhani said mutual cooperation should be bolstered in political, scientific, cultural and regional arenas.

He said that creating a tranquil situation in the region would be beneficial for Iraq and Syria, mentioning that Iran and France could play a crucial role in fostering peace and tranquility.

Citing terrorism as a global challenge, President Rouhani said Iran has been concentrating on tackling terrorism for a long time, adding that mutual cooperation would further facilitate counter-terrorism efforts.

President Rouhani also expressed hope that the level of mutual cooperation could be expanded during Senemaud’s tenure.

Senemaud, for his part, said Paris is entirely determined in developing its relations with Tehran.

Touching upon the two countries’ old relationship, the envoy said France would spare no efforts to implement mutual agreements.

“France is keen on expanding cooperation with Iran in development projects and in the implementation of joint plans,” he said, adding the ground is properly prepared for expanding mutual collaboration in political, economic, cultural and scientific arenas.