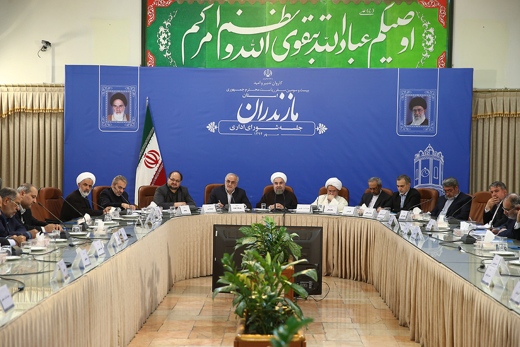 The president said in the process of parliament's examination of JCPOA, the Supreme Leader and the public supported his government.

President Hassan Rouhani has reiterated that the Supreme Leader of the Islamic Revolution Ayatollah Seyyed Ali Khamenei’s guidelines on the nuclear issue formed the basis of the nuclear talks.

“We said in the course of negotiations that if the economic sanctions are not removed at the end of negotiations, we will leave the negotiating table,” President Rouhani said, addressing a meeting of Mazandaran Province’s Administrative Council on Monday.

“We must bring down the wall of sanctions which is the demand of the nation,” he added.

He said that in the process of examining the Joint Comprehensive Plan of Action (JCPOA) by parliament, the Supreme Leader and the public supported the government.

“One of the benefits of JCPOA for the Iranians is the display of our national unity because JCPOA is a national issue,” added the president.

Rouhani said that if the Iranians intend to become invulnerable to the probable plots hatched by the enemy we need to be strong, when we have a large crowd of unemployed citizens in our country everyone can exert influence on Iran.

“If we will create a strong economy, sufficient employment opportunities and enough target markets for our exports, we will be able to compete with major world companies; then the ways enemy infiltration will be blocked,” he added.