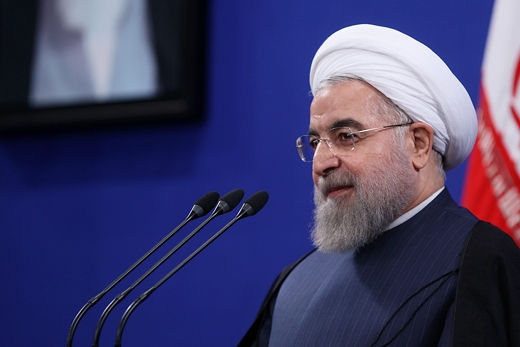 He took a swipe at Ahmadinejad for claiming that he deserves to lead the global community which prompted the enemies of the Iranian nation to impose crippling sanctions on Iran.

President Hassan Rouhani said on Saturday that the great Iranian nation will decide how much oil to sell and where to sell it, to what bank account to deposit its money, and where or how to spend it.

He took a swipe at former President Ahmadinejad for claiming that he deserves to lead the global community which prompted the enemies of the Iranian nation to impose crippling sanctions on Iran.

“Unfortunately, miscalculated measures by former statesmen undermined the prestige and glory of the Iranian nation,” President Rouhani said in a critical tone.

He said that in the past, due to dependence on oil and the outward looking nature of the Iranian economy, others instructed Iran on oil sales and the prices were decided by the market and not by Iranians themselves.

He added that Iran under sanctions had to export only one million barrels of oil and not more, which amounted to a drag on the Iranian nation, dealing a blow to national pride and dignity.

“Our nation has resisted and the resistance of our nation deserves to be praised and be told well done. Our nation should know that the arrogance and the big powers have put shackles on the economic movement of Iran and impeded its progress, targeting its dignity, freedom, trade and sale of their resources. And now, the Joint Comprehensive Plan of Action (JCPOA) means breaking all those shackles,” he said.

“That (JCPOA) is what our national heroes held talks with six major powers around the clock for two years and fought for each word and sentence of it so that context of the deal was achieved. No one can claim throughout history that the context of the deal is inconsistent with the dignity and majesty of Iranian nation. You do see that whole the world and all countries, excluding an illegitimate regime and a number of extremists inside the US, have been humbled by the agreement, viewing it as being in line with international peace.”