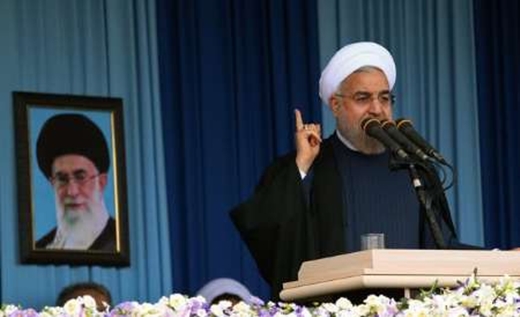 He said that his government is committed to developing the country and removing the sanctions and will stand up against those who have a vested interest in foreign sanctions.

President Hassan Rouhani said on Sunday that his government will use all the capacities to have the anti-Iranian sanctions removed.

Speaking to a large gathering of people in Bojnurd, the president referred to the economic pressure of sanctions on common people, adding that those who believe sanctions are unimportant are not aware of the people’s pocketbook issues.

Those who are against negotiations are those ill-wishers who imported goods from abroad ten times as expensive as the normal price, the President added.

He said that his government is committed to developing the country and removing the sanctions and it will stand up against those who have a vested interest in foreign embargos.

The government has the support of the Supreme Leader and nation and will use all its capacities to convince the UN to remove Iran’s sanctions, Rouhani underlined.

President Rouhani and some members of his cabinet including the interior minister arrived in Bojnurd, capital of northeastern province of North Khorasan, Sunday.

During his one-day stay in the northeastern city, President Rouhani is to hold public meetings, confer with officials, and meet provincial officials as well as the elites of the province.