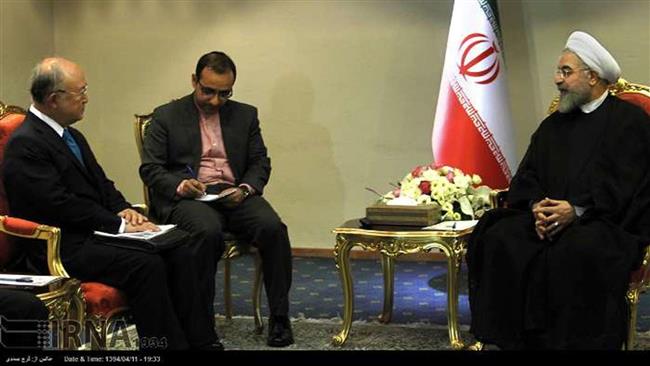 President Hassan Rouhani underlined that Iran and the International Atomic Energy Agency (IAEA) can resolve their remaining issues in a short time.

‘Iran is still ready to achieve a fair framework for settling the remaining issues in the specified time under the safeguards and existing regulations,’ President Rouhani said in a meeting with IAEA Director General Yukiya Amano in Tehran on Thursday.

The Iranian president noted that Iran like other member-states of the non-proliferation treaty (NPT) should achieve its full nuclear rights and there should be no discrimination in this regard.

He pointed out that the expansion of peaceful nuclear activities and also non-proliferation of nuclear weapons are two important duties of the IAEA which should be fulfilled in a balanced way and without discrimination against its member-states.

‘Iran’s transparent cooperation with the IAEA is a golden example of a large number of examples and it has been proven for the IAEA that the accusations on Iran’s diversion from nuclear activities have been baseless,’ President Rouhani added.

The Iranian president reiterated that proving the non-diversion from nuclear activities by Iran over past 12 years of close cooperation with the IAEA is the best judgment for international public opinion.

‘The IAEA should play its conspicuous role in this juncture that talks with the Group 5+1 is approaching its final stage,’ he added.

President Rouhani pointed to the settling of several problems in the past due to Iran-IAEA cooperation, and said, ‘If there will be necessary will in both sides and some non-technical issues do not interfer, some differences can be fully resolved in a short period of time.’

IAEA director general, for his part, appreciated Iran’s cooperation with the agency, and said, ‘We have always announced in the past inspections that Iran’s nuclear activities have had no diversion towards military objectives following the previous inspections and that the country has always fulfilled its commitments.’

Amano pointed to his constructive talks with Secretary of Iran’s Supreme National Security Council Ali Shamkhani, and said, ‘I believe that through mutual respect and close cooperation all issues can be resolved and I hope that IAEA’s reports will help to the process of nuclear talks after this visit.