Pakistani Journalist Writes about His Visit to Iran 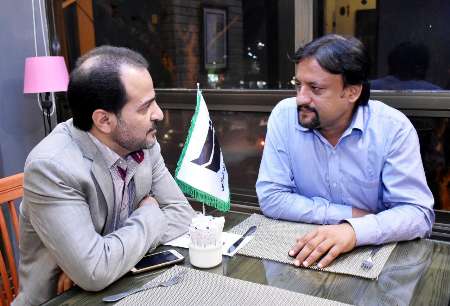 Alireza Alavi, a Pakistani journalist, recently travelled to Iran for a few days. He published an article in Nawaiwaqt newspaper after he returned and shared his experience through “the words from his heart.”

“I wish Pakistanis were united too and they would think of their country’s national interests only; free from conflicts.” These are the words of Alireza Alavi, the editor-in-chief of Pakistan’s APP, the premier government news agency, who visited the three Iranian cities of Mashhad, Qom and Tehran during his first visit to the country.

Alavi, who has been impressed by the determination and unity among followers of different religions and groups of people in Iran, says his words in his article were straight from his heart.

Here is IFP’s translation of excerpts from his article published by IRNA.

I shall start with the fact that Iran is the land of Salman al-Farsi, a companion of the Prophet Muhammad (PBUH) and many greats such as Khayyam, Saadi, Hafez, Ferdowsi, Shaykh Tusi and Shaykh Tabarsi.

Governments in Iran have always been interwoven with a spiritual aspect since tens of years ago. Western powers on the other hands have always been brewing plots to impede the progress of this country.

Iran scored a diplomatic victory in the nuclear talks to lift the sanctions imposed on it and expedite the achievement of economic prosperity.

Iran’s progress in the fields of medicine, science, information technology and nanotechnology is amazing. I witnessed the rapid growth and prosperity in this country; Imam Khomeini International Airport with its modern design and facilities such as metro lines, bus transportation systems, variety of development projects, infrastructure and construction of tall building.

These are all despite an eight-year-long war. Iranians, however, never wavered in their resolute determination to tread on the path of progress and development of good relations with neighboring countries.

Significant participation of women in the society, particularly their presence in managerial positions, private sector, airports, shops, trading centers and so on and so forth is admirable. Hijab never hinders the activity of female journalists in any way.

Iran–e-Sepid (white Iran) which is a braille newspaper for blind people caught me by surprise. I had a meeting with a senior official from Iran’s Ministry of Culture and Islamic Guidance who said that over 200 newspapers and 7,000 magazines are published in the country.

Astan Quds Razavi is an autonomous charitable foundation in Mashhad which manages the Imam Reza shrine. I had a meeting with the foundation’s authorities and they said nearly 25 to 27 million pilgrims visit the Shrine each year, from which 200,000 are from Pakistan. Mashhad, which was the cultural capital of the Islamic world in 2005, has been selected once again for the second time in 2017.

I visited an advisor to the secretary of Iran’s Supreme National Security Council and he highlighted the significance of Chabahar and Gwadar ports to promote peace and prosperity for the region. These two ports are in no way against each other; they collaborate with each other.

Iranian authorities stressed that strengthening ties with Pakistan is a priority for their country.

Before I see Iran for myself, I had a preconception that Iran belongs to only one religious sect; however, it proved otherwise. Iranians are only concerned about their country’s progress and unity. I wish we would follow the same approach in Pakistan.