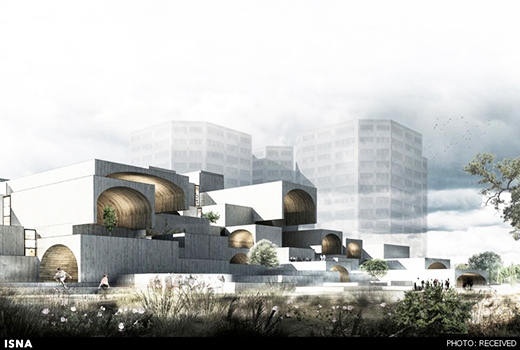 Isfahan Dreamland Commercial Center, a project designed by Farshad Mehdizadeh and Raha Ashrafi, has been among winners at the 7th annual World Architecture Festival in Singapore.

The 7th annual World Architecture Festival in Singapore is the biggest event in this field and has hosted 300 select designs from different countries in 30 categories. The Iranian Students’ News Agency (ISNA) filed a report on January 5 about the 3-day festival attended by five Iranian designs. The following is the translation of the report with a photo gallery of some designs:

Among the five Iranian projects presented at the festival, Isfahan Dreamland Commercial Center designed by Farshad Mehdizadeh and Raha Ashrafi was chosen as the best design in the category of Commercial Mixed Use (Future Project).

Unlike today’s commercial centers in Iran which are designed as box-like structures with no interaction with the outside and largely unaffected by it, the project in question is a series of arches and roofs which are mainly designed to put to good use the public space through integrating it into the interior.

Inspired by historical arched Iranian markets which affected the structure of the city and were affected by it, the architecture project creates a maze where the structure and the urban space meet.

This year’s winner in the category of Future Project of the Year was Art Gallery of Greater Victoria from Canada.