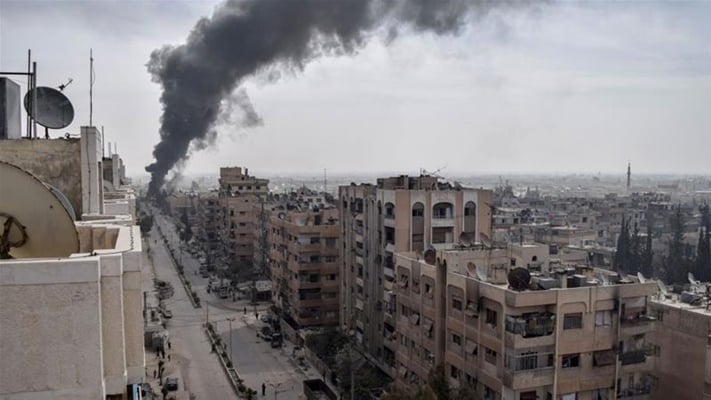 A fact-finding team from the Organization for the Prohibition of Chemical Weapons is on its way to Syria to investigate an alleged gas attack, while US President Donald Trump has already accused the Syrian government of being behind it and vowed retaliation against Damascus.

The team will begin working in Douma just outside Damascus by Saturday to investigate the attack which happened on April 7, OPCW spokesperson Johan de Wittlaan said Thursday.

Syria, Russia and Iran say reports of the attack were fabricated by militants and the US is seizing upon it as a pretext to attack the government.

On Twitter, Trump threatened a military response, but it’s not clear when that would happen or what it would look like.

Trump said in a Cabinet meeting Monday that “major decisions” were coming on Syria within 24 to 48 hours.

On Wednesday, Trump said that missiles “will be coming” in response to the attack.

However, on Thursday he tweeted that he “never said when an attack on Syria would take place. Could be very soon or not so soon at all!”

Later on the day, Trump told reporters at the White House that he was holding meetings on Syria and expected to make decisions “fairly soon.”

Fears of confrontation between Russia, Syria’s big ally, and the West have been running high since Trump issued his threat.

Russia has warned it would fire on any US missiles targeting Syria and the units launching them.

US Officials Divided on Evidence

It was not clear whether Trump and US allies would wait for the results of the investigation before deciding on a possible strike.

A day after Trump vowed to take revenge for the alleged attack, US officials were seemingly divided over evidence proving the Syrian government was behind it.

US Defence Secretary Jim Mattis said on Thursday the US was still looking for “actual evidence” of the attack.

“I believe there was a chemical attack and we are looking for the actual evidence,” Mattis told ​a hearing of the House Armed Services Committee, adding that he wants inspectors in Syria “probably within the week.”

Mattis said the US did not have any personnel on the ground in Douma during the attack and that ​time is of the essence to gather evidence, New York Post quoted him as saying.

“As each day goes by — as you know, it is a non-persistent gas — so it becomes more and more difficult to confirm it,” Mattis told the lawmakers.

This is while United Nations Ambassador Nikki Haley said the United States has “enough” proof.

“We definitely have enough proof, but now we just have to be thoughtful in our action,” ​she told MSNBC.

“We have proof that last week … chemical weapons were used, at least with chlorine, and that they were used by the regime of Bashar al-Assad,” Macron told TF1, a French television station, without offering details of any evidence.

In London, the British Cabinet had “agreed that the Assad regime has a track record of the use of chemical weapons and it is highly likely that the regime is responsible for Saturday’s attack,” Downing Street said in a statement.

But Germany announced that it would not be part of any coordinated military action in Syria, even as Chancellor Angela Merkel stressed the importance of Western powers sending a clear, united message that using chemical weapons “is unacceptable.”

“Germany will not take part in possible military action — I want to make clear again that there are no decisions,” Merkel said after meeting with Lars Lokke Rasmussen of Denmark in Berlin.

Moreover, Canadian Prime Minister Justin Trudeau has ruled out participation of the country in military strikes against Syria.

Speaking to Radio-Canada on Wednesday, Trudeau said Canada’s military will not participate in the expected attacks by western powers against Syria.