One table and seven Western miscalculations 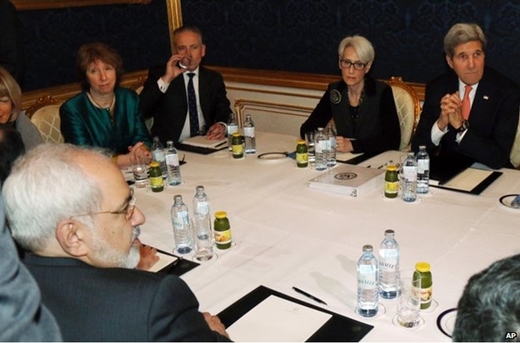 In an opinion piece, Kayhan daily has brought under the microscope seven miscalculations of the West at the nuclear talks with Iran.

Talks, at any level and with any intention, need a strategy to succeed. Calculations by parties to the talks help map out their strategies that set red lines and turn into negotiating tactics at a lower, operational level. The way each party identifies, analyzes and affects the calculations of the other party plays a decisive role in how talks proceed and what their outputs are.

Those sitting across from each other at the negotiating table try their utmost to develop a maximal understanding of each other’s calculations and tip – through diverse tools at their disposal – these calculations in their own favor, or disrupt them.

Kayhan daily on February 21 ran an opinion piece by Mohammad Sarfi about the seven miscalculations surrounding nuclear talks between Iran and P5+1 with the columnist saying that the Americans have made most of such miscalculations. The following is a partial translation of the piece which outlines those miscalculations:

1. Sanctions have brought Iran to the negotiating table: […] The phony war between the White House and the US Congress over new Iran sanctions have been designed and implemented based on such an assumption. Unlike what the Americans believe, basically the Islamic Republic of Iran has never opposed the question of talks; rather, Tehran has even welcomed it. Washington should not forget that in the past it would not agree to anything less than a complete shutdown of Iran’s nuclear program. That talks are underway is not because of sanctions, but because Iran has hold on to its rights and rightful stance.

2. Iran will continue to sit at the negotiating table for good: […] If the purpose of the talks is to reach a deal, they could not be extended multiple times, but if they aim to pass time and freeze activities, parties involved can continue talks on an open-ended basis!

3. A breakdown in talks is catastrophic: […] Suspension of talks would translate into the end of the honeymoon the Americans had after the Geneva deal. Given the unsatisfactory condition of the two sides in the Geneva deal, the Americans are like customers who go to a restaurant, order and eat food expecting the restaurant owner to foot the bill; who will suffer if the eatery is shut down?

4. Iran’s hands are tied: […] For 36 years, the Americans have had such an impression of Iran on different fronts; they have seen the opposite of what they thought, though. […] Iran’s hands are not tied; rather, it can have a hand in developments beyond its borders and play an influential role [in regional events].

5. A final deal can solve Iran’s problems: It is not just the West who has such an assessment of a possible nuclear deal; there are some groups inside the country who have turned a blind eye to realities trying to paint a false picture of the future of a final nuclear deal. […]

Those analysts who build on economic realities to make realistic comments have time and again said that even if we wake up to a day of no sanctions, there will be no immediate effect on the country’s state of economy. […]

Iran’s economic structure is in need of a surgery and the removal of sanctions will be like a painkiller which delays the surgery.

6. An everlasting alliance sits across the table: Some think that those facing Iran across the negotiating table are part of a strong alliance. But the ground realities say something else. Russia has been targeted by US and European sanctions. […]

Although China may sound silent, its bone of contention with the US is no less than Russia’s. At this situation when tensions are rising, it is immature to think that the party across the negotiating table has a consistent agenda to push.

7. Trial instead of negotiations: […] Again and again the Westerners have said openly that these talks are the acid test for Iran to see if it wants to be a normal country or continue to be a revolutionary nation. They [wrongly] think that the fact that Iran has sat around the negotiating table means it has abandoned the ideals of the Islamic Revolution. […]

Attempts to place unrelated topics – such as human rights, regional questions and the Islamic Republic’s missile capability – on the table stem from the very same miscalculations by the United States. […]