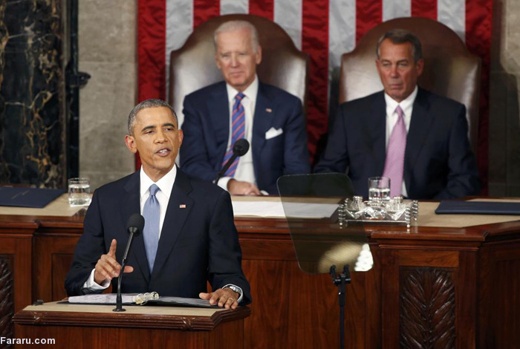 President Obama has threatened in his State-of-the-Union speech that he would veto any congressional bill that would slap additional sanctions on Iran.

US President Barack Obama used his State of the Union address on Tuesday to once again threaten that he would use his veto power to thwart any bill that would place additional sanctions on Iran over its nuclear program.

“New sanctions passed by this Congress, at this moment in time, will all but guarantee that diplomacy fails,” Obama said during the speech before a joint session of the House of Representatives and Senate, adding, “That is why I will veto any new sanctions bill that threatens to undo this progress.”

“Our diplomacy is at work with respect to Iran, where, for the first time in a decade, we’ve halted the progress of its nuclear program and reduced its stockpile of nuclear material,” Obama said.

Obama said that Iran and P5+1 – the US, France, Britain, Russia, China and Germany – have a chance to reach a comprehensive agreement by this spring.

The president, however, said that “there are no guarantees that negotiations will succeed” and vowed to “keep all options on the table to prevent a nuclear Iran.”

Obama warned that any new hostile move against Iran would “alienate” the United States from its allies and ensure that “Iran starts up its nuclear program again.”

The comments came as the White House and Congress remain divided over Iran, with a bipartisan group of senators pushing a new round of sanctions against Tehran.

Iran and P5+1 are in talks to work out a final deal aimed at ending the longstanding standoff over the Islamic Republic’s nuclear program.

Political directors of Iran and P5+1 states wrapped up their talks in Geneva, Switzerland, on Sunday.

This was the second round of discussions since Tehran and six world powers failed to work out a permanent nuclear deal by last November’s deadline despite making some progress.

The two sides decided to extend their talks for seven more months until July 1, with the interim deal they had signed in Geneva in November 2013 remaining in place.

Tehran and the six countries now seek to reach a high-level political agreement by March 1 and to confirm the full technical details of the agreement by July 1.

The scale of Iran’s uranium enrichment and the timetable for the lifting of anti-Iran sanctions are seen as major sticking points in the ongoing negotiations.