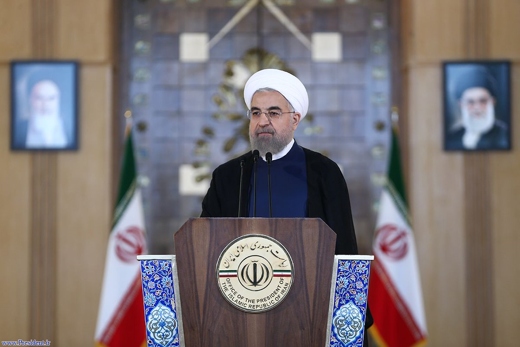 Today marks an end to injustices and a beginning for a new cooperative trend in the world, President Rouhani said.

Following the announcement Tuesday by Iranian and EU top diplomats that Tehran and P5+1 have finally struck a nuclear deal, President Rouhani made a televised speech aimed at the Iranian people and the international community at large on the agreement his administration has inked with six world powers.

The following is the translation of an excerpt from his speech which was aired by IRIB (Iranian state TV) on July 14:

The 12-year period during which major powers had illusions about Iran is over. Today a new chapter has opened in our relations with the international community which should know that a less costly shortcut exists for the problems the world is facing.

During this period, the nuclear case had become a political issue and an excuse for some to promote Iranophobia.

As I have said before sanctions never worked, yet they did have an impact on the lives of Iranian people. After 23 months of talks, we have arrived at a new point.

During this period, we sought a fair give-and-take with the world in keeping with our national interests. We assumed that only win-win talks can work and our negotiators built on that assumption for 23 months.

To clinch a deal we needed national consensus. Naturally, parties and individuals with different political leanings and affiliations hold different views. But we built on issues such as our national interests, security and development and managed to secure the consensus we needed.

From the very beginning holding talks with world powers was in line with the views of the Supreme Leader.

In the 2013 elections, people explicitly said that they wanted a government that paid attention to nuclear achievements and pocketbook issues at the same time.

In the course of the talks, we streamlined our economy; we contained the runway inflation and secured positive economic growth.

The perseverance of the Iranian people was the most important issue during this period. We followed four objectives in the talks: 1. Maintaining our nuclear capability, 2. Having the unfair sanctions lifted, 3. Having all illegal UN Security Council resolutions rescinded, and 4. Taking the nuclear case off the UN Security Council agenda. All those objectives have been met in the deal we struck today.

Our economists, experts and scientists contributed to the conclusion of this deal. Under the deal, we can keep more than 6,000 centrifuges, including over 5,000 in Natanz operational and 1,000-plus in Fordo.

On research and development, the world has agreed to Iran continuing R&D on IR8.

The deal recognizes Iran’s right to keep the heavy water reactor in Arak in place.

In Fordo, more than 1,000 centrifuges will remain.

Initially, world powers wanted to phase out the sanctions based on verification; under this deal all sanctions, including financial, banking, insurance, transportation, and petrochemical sanctions will be terminated.

The arms embargo will be lifted after five years. In the days to come when the UN Security Council reviews this deal, all six resolutions issued against Iran in the past will be rescinded.

This deal is not based on trust; this deal serves as a test. If this deal is implemented in a proper way, it can bring down the wall of mistrust.

This is a 2-way street; implementation of the deal is a mutual process. If they remain committed to the deal, we will keep our end of the bargain.

This process comes in three phases:

In the first phase which saw the two sides issue a joint statement earlier today, all seven countries involved in the talks agreed to the wording of the deal.

In the second phase, the text of the deal should be approved by the UN Security Council.

And in the third phase, the final deal is actually signed and its implementation officially begins.

Today is the most important day in the past 12 days because the world has recognized Iran’s nuclear activity. They have announced they will cooperate with Iran; they have said all sanctions will be lifted and all resolutions will be rescinded.

Today marks an end to injustices and a beginning for a new cooperative trend in the world.

People in countries allied with us are happy too because the Zionist regime failed in its efforts to thwart the deal.

From the very beginning, in keeping with a fatwa issued by the Supreme Leader, we did not seek to develop a nuclear bomb.

I welcome constructive criticism, but I won’t allow public hope for a bright future and economic prosperity to be dashed by fake statements and slanders.

In conclusion, I’d like to say that regional countries should not be fooled by the Zionists. We view regional stability and security as our own. Iran does not seek WMD. We do not want to put pressure on regional countries. We seek better relations and close cooperation with our neighbors and countries in the region.