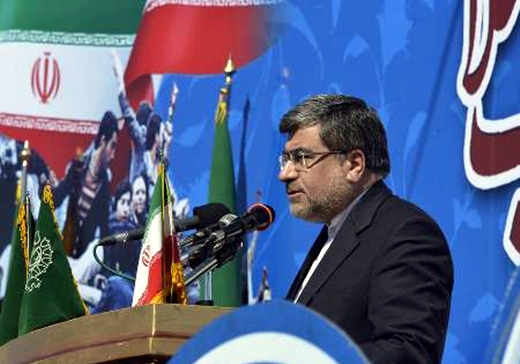 Iranian Minister of Culture and Islamic Guidance Ali Jannati said the Islamic Republic of Iran's victory against world powers in the nuclear talks is the most outstanding and glorious historical and political achievement for the country.

Addressing a gathering of people in the southeastern city of Zahedan on the occasion of the anniversary of the Islamic Revolution’s victory on Thursday, Jannati said, “The nuclear victory was a great success which was made possible by people’s cooperation, the Leader’s guidelines and nonstop efforts by the negotiating team of the Rouhani Administration.”

He said the draconian sanctions made the past few years very difficult especially in economic fields for the Iranian nation and government.

The 6 anti-Iran UNSC resolutions would lead to a military confrontation against Iran but the negotiating team could annul the resolutions through dialogue and finalization of the nuclear deal, Jannati added.

“The nuclear deal was proof that nuclear energy is the right of the Iranian nation and the world community has endorsed this right,” he said.

The deal also cleared Iran of accusations that the West leveled at Tehran saying its nuclear program is aimed at developing a nuclear bomb, he said.

The senior official said the swift reception of Iranian president by France and Italy is an indication of the significance of Iran for the world.

He said the administration of prudence and hope could have the sanctions removed which were the biggest hurdle in the country’s scientific advancement.

He said the administration is also making every effort to remove obstacles to boosting production, economy, curbing inflation and dependence on oil revenues.

For the time being, hundreds of globally recognized companies have expressed their readiness to enter the Iranian market and invest in its development projects.