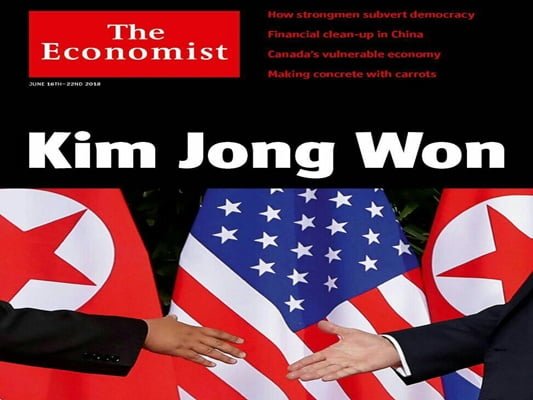 A political analyst says the agreement reached between the US and North Korean leaders is mostly in the interests of Pyongyang.

Mohsen Baharvand has, in an opinion piece published in Etemad daily, weighed in on the historic summit between North Korean leader Kim Jong-un and US President Donald Trump, which took place in Singapore on June 12, 2018. The full text of the analytical piece follows.

The summit between the US president and North Korean leader has drawn global attention. Many predictions had been made about the meeting. And from now on, Trump will take pride in the summit and will try to introduce it as a major accomplishment. However, the reality is that the summit was just a much-hyped meeting with no real achievement for the United States. Surprisingly enough, Trump and his team regard a comprehensive agreement like the JCPOA with its unique monitoring mechanism as a “failure” while they describe the Kim-Trump summit as a “victory,” which came about after only a few months of visits and discussions and is the result of a four-article statement – which is littered with ambiguity. Honestly speaking, many analysts did not expect such a weak outcome from the US negotiating team, whatsoever. It goes without saying that Washington has not been able to persuade Pyongyang to back down from its stances, and does not see a bright future for the talks and the continuation of the negotiations, and the statement will even put Washington in a tougher situation. I will try to briefly analyze the provisions of the agreement one by one to further clarify my point for the readers.

The two signatories to the deal have agreed in Article 1 to establish bilateral relations. Immediately after this sentence, they have mentioned “as desired by the people of the two countries” to establish peace and prosperity. Technically speaking, the unconditional willingness of the two states to establish full ties is not mentioned because they have very tactfully and indirectly conditioned having bilateral ties on the willingness of the people of the two countries. If they were firmly determined to do it, they needed to simply state that mutual relations WILL be established, or at least “will be established as this is what the people of both countries want.” Technically speaking, we can say that the two sides have not reached a final conclusion in that regard. Moreover, this Article will put Washington in a difficult situation. The United States is unlikely to implement this article any time soon without first achieving its demands because the sanctions imposed by the US and North Korea’s nukes are an obstacle to the establishment of close relations between the two sides. If Trump is serious in establishing a new relationship, it will have no option but to lift the bans. This is exactly what North Korea needs to end its long-running isolation. If Trump does not lift the sanctions, he will have to return to his previous stances and the two countries will once again get stuck in a standoff. On the whole, Article 1 is in the interests of North Korea in that it puts the US in a bind.

In Article 2, it is stated that the United States and North Korea will make joint efforts to establish a peace “regime” on the Korean peninsula. One has to ask why the word “regime” is used rather than “conclusion of an agreement” or “peace agreement.” It goes without saying that no complete and clear agreement on the conclusion of a peace deal has been reached between the two Koreas. The word “regime” is an ambiguous term and usually refers to a number of political and legal agreements or measures. This is significant in that a peace deal could be to Washington’s detriment. If the two Koreas clinch a peace agreement, the US will have no acceptable excuse to maintain its military troops in South Korea and its coastal waters for purposes part of which is related to China. A potential peace agreement can lead to the annulment of United Nations Security Council resolutions against North Korea and the removal of some excuses for the imposition of sanctions against that country. It is clear that North Korea would have liked to see a peace agreement reached, but the phrase “peace regime” could include a peace agreement, the presence of American troops, and other things in the future. Ambiguous and equivocal words are usually used in order to keep negotiations from breaking down. Here, we can say that North Korea has backed away from its main demand to some extent, but the reality is that North Korea was realistic enough to realize that it cannot decide for US-South Korea relations even in the best-case scenario.

In Article 3, North Korea has committed itself to working towards the denuclearization of the Korean peninsula in keeping with the Panmunjom Declaration. This article was the main objective of the talks. Nevertheless, with a little attention, one can find out that North Korea has not made any new pledges. Basically, Pyongyang has no problems with the obligation stipulated in this clause. First of all, the statement does not specify any clear commitments for North Korea to denuclearize. Pyongyang has only pledged to take action in that regard. Secondly, North Korea’s move is in line with the denuclearization of the Korean peninsula, and not only of North Korea. There is a very sharp difference between the viewpoint of the US and that of North Korea. Washington wants North Korea to denuclearize while Pyongyang seeks nuclear disarmament on the whole Korean peninsula. What are the consequences of this article? If we accept the denuclearization of the Korean peninsula, then we should also accept that firstly, in tandem with North Korea’s dismantling of its nukes, the US should also pull its military hardware, namely aircraft, warships and nuclear-armed submarines out of the land, airspace and waters of the Korean peninsula. Second, “denuclearization,” which is the word giving credit to the statement, simply means the dismantling of nuclear weapons, not peaceful nuclear installations. The statement remains silent on two issues within this framework. First, North Korea’s peaceful nuclear program and second Intercontinental Ballistic Missiles (ICBM). It is clear that even if North Korea dismantles its nuclear arms, it will try to maintain a peaceful nuclear program at the level of South Korea. Seoul is currently enriching uranium to high levels of purity, around 60 percent. If North Korea can maintain this level of enrichment and have its ICBMs at the same time, it will be very easy for the country to develop nukes once again in the near future if it needs to, given the expertise and experience it has. In this article, the US has failed to impose its demand on North Korea; rather, it is North Korea that has tactfully refused to accept any specific commitments and has only repeated its past positions.

Article 4 of the statement, in fact, monitors a routine procedure after renouncing hostilities. In this article, both signatories have undertaken to take action to return the remains of the war dead and make efforts to identify the remaining bodies. This should have been done more than half a century ago. It should have been done in accordance with international humanitarian laws immediately after the ceasefire went into effect. So, the main objective was not to get a specific result from an action which is popular among countries. What they undertook to do was merely a humanitarian move, and both parties to the statement were obliged to do it even without the statement. All in all, and in conclusion, we can regard the US and Trump himself as the loser of this round of talks. It goes without saying that Trump did need the agreement, and had to give up his initial demands in most cases or keep them in s shroud of secrecy. If Donald Trump claims victory in these negotiations using his own modus operandi, that will be surprising. Unlike Trump, we should give a positive score to the North Korean side, which decisively entered into talks without kicking up a fuss and was not swayed by Washington and Trump’s propaganda campaigns, and, despite the wrong interpretations of many analysts, was able to conduct and end the talks in its own favour.

But if I am to give a piece of advice to the Korean side, I will definitely mention two points. First, the US may be the loser as far as the text and content of the agreement are concerned; however, in cannot be said that Washington will be the loser at the end of the day and in an ultra-text context. Basically, the United States’ modus operandi is that it goes through a text, and after the negotiations are over, it adopts measures and makes unilateral and arbitrary interpretations in a bid to tip the final outcome in its favour. North Korea should remain on the watch for this tactic of Washington. And this is my second recommendation: With a cursory look, one can cautiously say that North Korea benefits most from the statement by living up to the commitments in the order stipulated in the document. The US may first seek to implement some of the articles which serve its interests, but, at the end of the day, it can wriggle out of the obligations that are not in its interests.