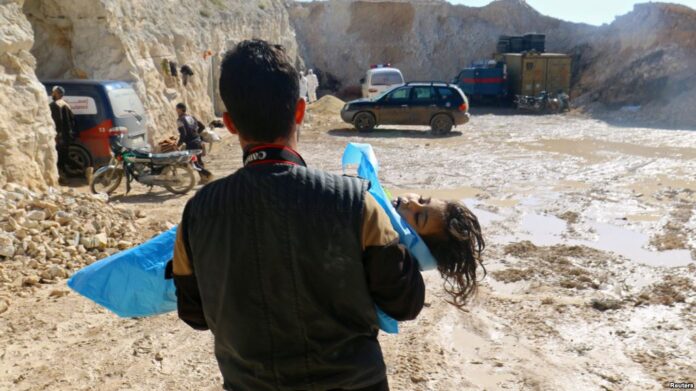 A Middle East expert rejects the accusations that the Syrian government has used chemical weapons in the city of Idlib.

In a Farsi interview with the Hamshahri daily, the senior Middle East expert and former Iranian envoy to the Organization of Islamic Cooperation (OIC) Sabah Zangeneh has weighed in on the allegations that the Syrian government has used chemical arms in Idlib.

The following are the comments he made during the interview:

Following the events in east Ghouta in 2013, the United Nations seriously went into action in tandem with Russia’s intervention. The world body’s institution tasked with controlling chemical weapons dismantled all centres used for the production and stockpiling of chemical weapons in Syria, a move which tipped the balance of fear between Israel and Syria in favour of Tel Aviv.

Accordingly, the case was closed on the first phase of the chemical arms dispute in Syria with the intervention of Russia. But after some time, the international community found out the chemical weapons were used again later on at certain points in time (including in 2014 and 2015).

Based on existing documents and information, the ISIS and al-Nusra Front terrorist groups as well as their offshoots are to blame for using chemical weapons after the UN dismantling of Syria’s chemical weapons arsenals.

What is noteworthy is that despite such information and papers, no campaign was launched to make the world aware of the terrorists’ use of chemicals, and the issue was almost shelved. And now, the issue of using chemical weapons, this time in Idlib, has emerged again.

As you know, Idlib is one the hotspots where militants are operating seriously in an organised manner. The concentration of terrorists there has been mainly led by Turkey’s military-security apparatus with the help of certain other regional countries. It seems that centres have been constructed for producing and storing chemical arms by militants operating in Idlib with the help of those who provide the terrorists with military and financial support.

[Concerning accusations that the Syrian warplanes have attacked Idlib with chemical bombs,] one should bear in mind that the Syrian army has been making gains against terrorists for quite some time now, so much so that it has retaken vast areas from militants. So, it does not seem rational and logical for the Syrian government to turn its great victories into a bitter defeat by using chemical arms, especially in a region where dozens of powerful spying agencies can easily monitor any incident which takes place.

It does not seem rational and logical for the Syrian government to turn its great victories into a bitter defeat by using chemical arms.

On the other hand and from an international standpoint, the US has, in a high-profile about-face, announced the issue of toppling Syrian President Bashar Assad is no longer a priority for Washington, something which has made groups affiliated with Saudi Arabia, Turkey and Qatar feel threatened. So, the possibility of the Syrian Army having used chemical weapons is ruled out because it does not need to do such a thing after all.

As for who benefits from making such allegations and from using chemical arms, one should say that undoubtedly it is the terrorists in Syria that need to create such a crisis, hoping they might be able to stop the wave of victories by the Syrian army.

[As regards Israel’ role in this scenario] I should say Tel Aviv is indubitably concerned over any strengthening of Assad’s position and, hence, will use all means available to undermine the Syrian government to make Damascus more vulnerable to Western pressure.

[As for possible military intervention by the West in Syria] I would say taking military action is impossible. The reason is that if the issue of military intervention is brought up at the UN Security Council, investigation teams should study the issue, and the result of such a probe will not be in the interest of militants. Moreover, the presence of Russia on the Security Council will eliminate the possibility of an anti-Syria resolution being passed. And without a resolution, no Western country will be able to take military action against Syria.