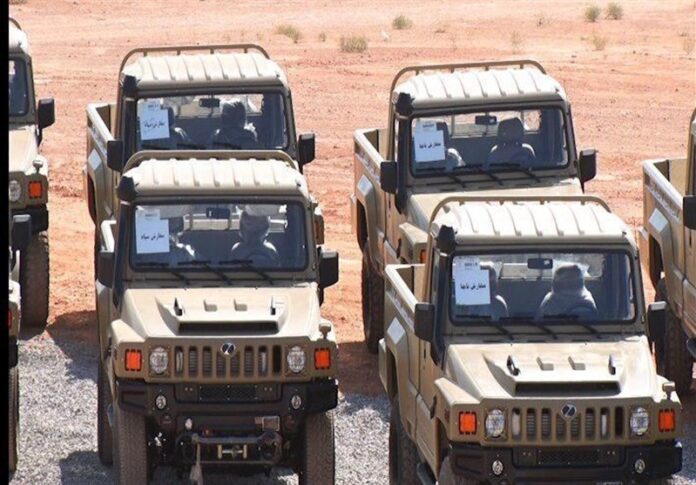 Iran’s defence ministry has unveiled a series of domestically built military vehicles, which it says will diversify the country’s arsenal after four decades of sanctions imposed by the US.

From uneven terrains to man-made roadblocks are part of the tests these Iran-made hudge tactical cars have to go through to be introduced into service in Iran’s military.

Iran’s defence ministry says the vehicles are produced from A to Z by experts at the ministry.

“The defence ministry spares no effort to bolster the military might of the Islamic Republic by relying on the expertise of its engineers,” said Brigadier General Amir Hatami, the Iranian defence minister.

“We felt the need to strengthen our mobility on land and therefore produced advanced military vehicles that can ensure the safety of our personnel during their missions.”

“This armoured vehicle is named Raad. The driver of this car is absolutely safe in case of an explosion, as its producers say it is mine-resistant and ambush-protected,” he said, elaborating on one of the vehicles produced.

Aras-2 is another tactical vehicle built by the defence ministry. The high mobility personnel carrier is capable of passing through water canals with the depth of 1.5 metres, as well as vertical obstacles as high as half a metre.

The defence minister says the ministry can act as an auxiliary arm to Iran’s automotive industry in the supply of auto parts that are in the list of the US sanctions.

“Given our human and scientific resources at the defence ministry, we are ready to support other sectors such as the automotive industry with our technology, which spares us the need to rely on foreign supply,” noted the Iranian defence minister.

Iran has been under forty years of arms embargo imposed by the United States.
The sanctions have made the country able to build up its defence industry by relying on domestic knowhow.

Tehran says it has become self sufficient in production of the majority of its defence arsenal, from drones to missiles and now tactical vehicles.

Reports say in the next few weeks, the Iranian military will introduce its upgraded version of Bavar-373 air defence system.

According to the Russian aviation sources, this upgraded air defence system will not only replace the Russian-supplied S-300, but also surpass the latter.

According to the data presented, the Iranian Bavar-373 radars can detect air targets at distances of up to 300 kilometers, and, in addition to aircraft, the radar is able to detect cruise and ballistic missiles, as well as small drones.

The Iranian military previously acquired the Russian S-300 in 2015, but the country’s engineers had already begun working on a new air defence system to improve their capabilities.