Neshat Jahandari has recently received her four stripes after her first independent flight, turning into the second woman airline pilot in Iran. 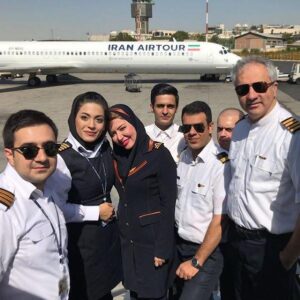 Although, there is no legal prohibition for women in the aviation field, entering into the profession has not been so easy for a woman.

“When I entered the pilot school, many were surprised and said this is a male profession and is not suitable for me,” she says.

“This strange behaviour could be a hindrance to me, but I believed in it and I was doing my job. I believe that everyone who does his/her best in every field, will certainly enjoy its result. In today’s world, as we have male professional chefs, we also have successful female mechanics engineers. Success has nothing to do with gender. Of course, it’s natural to be surprised to see a female pilot,” she noted.