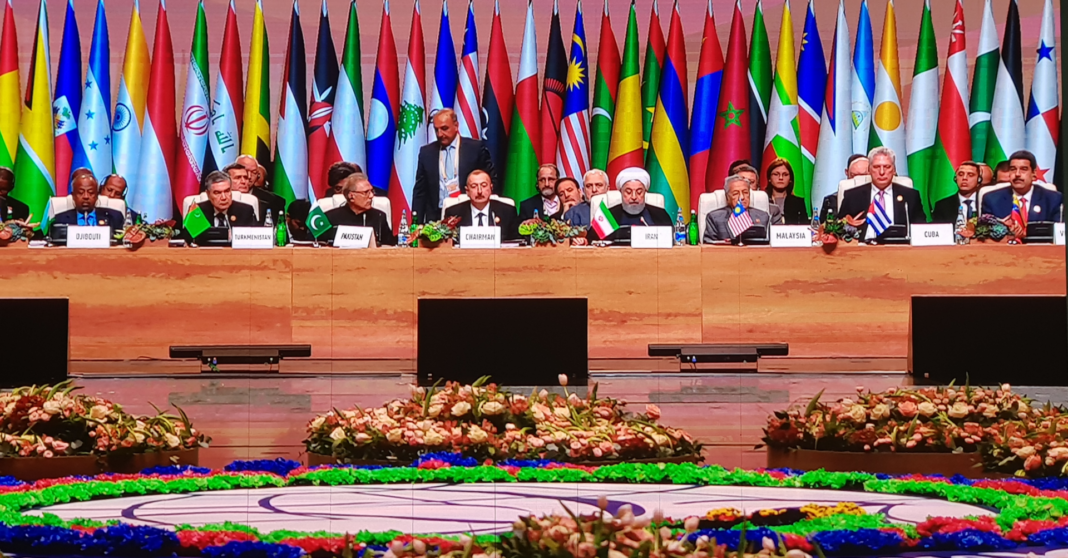 Iranian President Hassan Rouhani has delivered a speech at the 18th Summit of Heads of State and Governments of the Non-Aligned Movement (NAM), which was held on October 25, 2019, in Baku, the capital of Azerbaijan Republic.

In his address, the president highlighted the significant position of the Non-Aligned Movement (NAM) in the world given the huge population and vast area of land and territory of its member states as well as their votes in international organizations.

He said the Non-Aligned Movement can found a new pole of power in the multipolar world of future, but “for this to happen, we need to understand the new realities of the region and the world and utilise new tools and facilities of the world today.”

Your Excellency Mr Ilham Aliyev, the Honourable President of Azerbaijan

I should like to begin by appreciating the efforts of HE Mr Aliyev the Honourable President of the brother and neighbour country the Republic of Azerbaijan to hold this glorious summit with such warm and cordial hospitality. Also I would like to thank the government of the Bolivarian Republic of Venezuela and especially President Maduro for his valuable efforts and measures during his chair of the Non-Aligned Movement.

With the collapse of the bipolar system in international arena, the United States tried to impose on the world a unipolar and hegemonic order under the slogan of the new global system with reliance on its military, economic and media power. In the opposite front, the Non-Aligned Movement demonstrated its determination to withstand unilateralism in international system.  And the main tools in the hands of the US to impose unilateralism turned actually against it. In the area of economy, the expansion of free global trade in practice prepared the grounds for the growth of the developing world and the rise of new economic and technologic powers thus seriously challenging the US hegemony in economy and technology.

In the area of military and in order to impose its domination, the US staged extensive and destructive wars in various regions of the world and especially in West Asia and inflicted hundreds of thousands of casualties and thousands of billions of dollars in damages on the nations of the region.

These wars fuelled the blaze of sectarianism, extremism and terrorism in the region and the world, which will not leave people free for tens of years to come.

Notwithstanding, the failure of aggressors in realising their goals in the occupied countries caused the breakdown of the military and political hegemony of the United States in the international arena and  boosted the self-confidence of independent states to pursue their rights and interests.

During these times, the Americans’ discontent has been provoked with the sacrifice of thousands of their youth and misappropriation of thousands of billions of dollars of public resources in unfruitful wars as well as the waste of hundreds of thousands of jobs and spread of inequalities and poverty as the result of the wave of the globalisation of economy. The drastic reduction in public confidence in the US political establishment, parties and ruling elite has finally resulted in the emergence of people in politics whose policies have marked the beginning of the end of US hegemony and unilateralism.

This summit is convened under circumstances in which the world is rapidly transiting to multilateralism. In such complex period, violence and confrontation in various regions are on the rise. National sovereignty of independent countries are being violated in various forms. Inclination towards military polarisation, arms race, intensification of wars and conflicts as well as sectarian and regional divergence is increasing; So are law evading and violation of international commitments and interference in the domestic affairs of independent countries. Today the US is employing oppressive economic tools in order to impose its illegitimate political goals on independent nations out of desperation in such outrageous and arrogant ways considered to be economic terrorism. Under such turbulent conditions, the Non-Aligned Movement, as a set of countries representing more than two thirds of the UN member states, can be the pioneer on behalf of its members and the human society in finding solutions for the current global problems and within the framework of law abiding, fulfilment of international commitments, moderation and prevention of violence and extremism. The Islamic Republic of Iran, understanding the risks of terrorist and extremist groups, presented in the sixty eighth General Assembly of the United Nations a proposal under the title of the World Against Violence and Extremism (WAVE), which resulted in the subsequent adoption of two General Assembly resolutions in 2013 and 2015 and was noted with great attention in the Seventeenth NAM summit in Venezuela. Under such circumstances, independent countries require more exchange of views, synergy and coordination in order to safeguard their interests. Here, the Non-Aligned Movement, thanks to its valuable history and experience, can play an effective role in securing the interests of its members proportionate with the requirements of the new world.

Today, we are witnessing regional conflicts in places such as Palestine, Yemen, Syria and Afghanistan. The only way out of these crises passes through respect to the rights of nations to self-determination, commitment to non-interference in internal affairs of the others, strengthened regional cooperation for guaranteeing peace, stability and counter terrorism and establishment of proper grounds for engagement and dialogue. Such a framework is the best solution to end regional conflicts and we have been vanguard. On Syria, the participation of Iran, Russia and Turkey in the Astana format has brought peace and stability in major parts of that country while helping millions of refugees to return their homes. On other standing issues in West Asia, we welcome any initiative based on dialogue, negotiation and mutual respect. And we have been pioneer. Last month, I unveiled in the General Assembly of the United Nations the HOPE initiative, which stands for the Hormuz Peace Endeavour. The HOPE coalition aims to enhance peace, stability, progress, mutual understanding and peaceful and friendly relations among all the countries located in the Persian Gulf and the Strait of Hormuz as well as avoidance of intervention and intimidation. This plan includes various avenues for cooperation in guaranteeing energy transfer security and freedom of navigation in the Strait of Hormuz and beyond with the participation of all the countries of the region. We believe that stability and security of our neighbours are tied to our own stability and security. And regional security and development are attainable only through cooperation and collective participation of neighbours.

America’s domination over the international monetary system has encouraged the United States in the past several decades and particularly in recent years to misuse dollar regularly to put political pressure on independent states most of which  NAM members and enforce various sanctions and limit access to international monetary systems. Such measures are in direct conflict with the legitimate freedom and rights of independent nations and the Non-Aligned Movement can take important steps to neutralise the impact of such tools. This can take place with international commitment to the requirements of economic sustainability, expansion of trade ties on the basis of bilateral and multilateral monetary treaties، employment of independent and alternative initiatives on banking services and increased use of crypto currencies. Of course, all of this should be accomplished in line with upholding international anti-money-laundering and terrorism financing rules. Many NAM member states including Iran have placed this important issue on their agenda.

One of the other threats to the security and independence of free nations in the world today is the insecurity of cyberspace and illegitimate use of social networks and macro data for influencing global public opinion especially in politics. The security of the cyberspace and integrity of social networks are prerequisites for freedom and prosperity of independent nations in the 21st century. Our movement can be at the forefront of taking a coherent strategy and devising an international agreement on cyber security and help reduce the vulnerability of independent nations against cyber attacks and misuse of virtual space.

I believe that the Non-Aligned Movement blessed with a big population and vast area of land and territory as well as votes in international organisations can found a new pole of power in the multipolar world of future. For this to happen, we need to understand the new realities of the region and the world and utilise new tools and facilities of the world today.

The Islamic Republic of Iran like in the past would spare no efforts for the further success of the Non-Aligned Movement and its sublime goals.