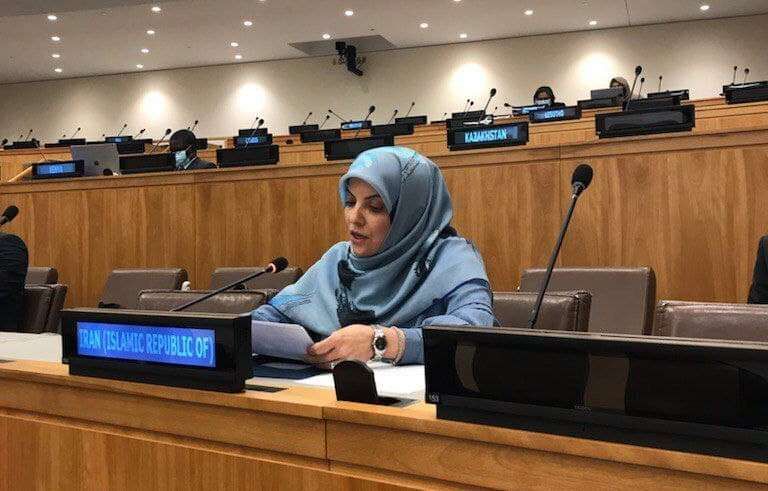 Speaking on behalf of the Non-Aligned Movement, ambassador and deputy permanent representative of Iran to the United Nations (UN) has stated that this movement wants the nations that have imposed unilateral sanctions against the other countries to end the sanctions immediately.

The full text of Ershadi’ statement is as follows:

Over the years, the Committee has worked diligently to produce various documents in the form of declarations and resolutions, such as the Manila Declaration. Negotiated and adopted by the Charter Committee in 1982, the Manila Declaration is only one of the many major achievements of the Committee. Such a body of work demonstrates the Committee’s strengths as an effective forum to clarify and promote general international law and charter provisions. The Special Committee has been also instrumental in the preparation of the Handbook on the Peaceful Settlement of Disputes, which needs to be updated in light of the new developments as well as the practices of Member States in this regard.

The Non-Aligned Movement is of the view that the United Nations is a central and indispensable forum dedicated to addressing issues relating to international cooperation, economic development and social progress, peace and security, human rights and the rule of law based on dialogue, cooperation and consensus-building among States. In this context, the Movement attaches great importance to the strengthening of the role of the United Nations and recognizes the efforts taken to develop its full potential.

The Non-Aligned Movement also reiterates its concern over the continuing encroachment by the Security Council on the functions and powers of the General Assembly and those of the Economic and Social Council through addressing issues which fall within the competence of the latter organs, and the attempts to enter areas of norm-setting and establishing definitions which fall within the purview of the General Assembly.

The Non-Aligned Movement reaffirms that the reform of the Organization should be carried out in accordance with the principles and procedures established by the Charter of the United Nations while preserving the legal framework of this constitutional instrument. For this purpose, the Special Committee on the Charter of the United Nations and on the Strengthening of the Role of the organization can contribute to the examination of the legal matters in this process.

The Charter Committee provides an opportunity for Member States to hear from the UN Secretariat regarding all aspects of the Introduction and implementation of sanctions imposed by the United Nations, in accordance with the guidelines contained in the Annex to General Assembly resolution 64/115 of 16 December 2009.

It is important to note that this document is the product of the Charter Committee and provides a comprehensive as well as balanced approach to the issue of UN sanctions. As such, we expect that the briefing by the Secretariat will preserve such a balanced approach. In particular, we are interested in hearing more about the perceived objective assessments of the short-term and long-term socio-economic and humanitarian consequences of sanctions by the Security Council’s Sanction Committees, including the methodology used for the assessment of the humanitarian implications of sanctions. We also expect the information on the humanitarian consequences of the introduction and implementation of sanctions to be presented, including those which that have a bearing on the basic living conditions of the civilian population of the target State, on its socio-economic development and on third States which have suffered or may suffer as a result of their implementation. We also call on the UN Secretariat to develop its capacity on the proper assessment of the unintended side effects of sanctions imposed by the Security Council.

We note that the capacity of the Secretariat has not been sufficiently developed in the past in order to adequately and fully assess the short-term as well as long-term socio-economic and humanitarian consequences of UN sanctions. In this regard, there is a dire need to enhance the expertise and capacity of the UN Secretariat in order to enable its ability to properly assess the unintended consequences of the UN sanctions on civilian populations.

The Security Council’s imposed sanctions still remain an issue of serious concern to the Member Countries of the Non-Aligned Movement. It is the Movement’s view that the imposition of sanctions should be considered as a last resort. Furthermore, targeted sanctions may be imposed only when there exists a threat to international peace and security or an act of aggression, in accordance with the Charter. They are not applicable as a preventive measure in any and all instances of violation of international law, norms or standards.

Sanctions are blunt instruments, the use of which raises fundamental ethical questions as to whether the suffering inflicted on vulnerable groups in the target country is a legitimate means of exerting political pressure. The objectives of sanctions are not to punish or otherwise exact retribution on the populace.

Sanctions regimes should avoid triggering unintended consequences in the target State or third States which may lead to violations of human rights and fundamental freedoms. They should also avoid hindering humanitarian assistance from reaching the civilian population.

In this regard, the objectives of sanctions regimes should be clearly defined based on tenable legal grounds, and their imposition should be for a specified timeframe. Lastly, such sanctions should be lifted as soon as the objectives are achieved. The conditions demanded of the State or party on which sanctions are imposed should also be distinctly outlined and be subject to monitoring its impacts and periodic review.

The Movement also expresses its deep concern regarding the imposition of laws and other forms of coercive economic measures against developing countries, including unilateral sanctions, which violate the Charter of the United Nations and undermine international law as well as the rules of the World Trade Organization. Furthermore, the Movement calls on countries that have imposed unilateral sanctions to put an end to such sanctions immediately.

The NAM fully supports all efforts aimed towards promoting the peaceful settlement of disputes based on provisions of international law and the Charter of the United Nations. In this regard, the annual thematic debates on the means for the settlement of disputes is an important initiative highlighted by the NAM to the Charter Committee. A constructive and informative debate was held this year on States’ practices regarding the use of arbitration under the agenda item on peaceful settlement of disputes. Building upon the information presented within the debate, we are looking forward to discussing other means as well in order to work towards better understanding and progress. The Movement maintains that these annual thematic debates on means of dispute settlement can contribute to more efficient and effective use of such peaceful means while promoting a culture of peace among Member States. Moreover, when the Committee exhausts discussions on all means of dispute settlement reflected in article 33 of the UN Charter, the input and materials collected by this process can provide a valuable basis for further consideration by the Committee with an aim towards achieving concrete and result-oriented outcomes.

With respect to the proposals under the agenda items related to the maintenance of peace and security as well as peaceful settlement of disputes, the Movement expresses its concern over the reluctance of some Member States in engaging meaningful discussion. The NAM reiterates the need for genuine political will in order to advance the long-standing issues included in the agenda of the Committee and invites Member States to fully utilize the capacity of the Special Committee by bringing new and practical proposals to the Committee.

The Movement is of the view that the Committee should redouble its efforts, inter alia, to examine suggestions and proposals regarding the Charter and the strengthening of the role of the UN. Moreover, we are ready to engage in discussion with other groups to arrange a work programme for the Charter Committee to facilitate any discussion in the future with the aim of enhancing the ability of the UN to achieve its purposes.

The Movement takes note of the progress made by the Secretariat since the last report in updating the Repertory of Practice of United Nations Organs and the Repertoire of the Practice of the Security Council. However, the Movement notes with concern that the backlog in the preparation of volume III of the repertory is not eliminated. In light of this issue, the Movement calls upon the Secretary-General to effectively address this matter on a priority basis. Finally, we express our satisfaction with the availability of studies on the internet and regular updating of the website of the Repertory and repertoire by the Codification Division.